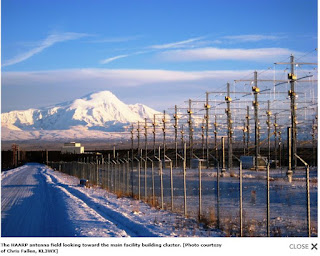 The just-concluded run of ionospheric investigations conducted from Alaska’s High Frequency Active Auroral Research Program (HAARP) observatory — quite likely the most powerful HF transmission facility in the world — revived the latent short-wave listener (SWL) lurking within most radio amateurs. Operating under Part 5 Experimental license WI2XFX, HAARP this month even aired some classical music as it conducted its first scientific research campaign since being taken over 18 months ago from the military by the University of Alaska Fairbanks (UAF) Geophysical Institute.
UAF Space Physics Group Assistant Research Professor Chris Fallen, KL3WX, focused on two experiments — one called “airglow” that literally aimed to light up the ionosphere, and another to demonstrate the so-called “Luxembourg Effect,” first noticed on a 1930s Radio Luxembourg broadcast. Public engagement was part of his plan, and Fallen this week said the Twitter and e-mail feedback from his transmissions had been “fantastic,” and that his science campaign had become “quite an event.”
“Thank you for making a difference and advancing Amateur Radio as well,” Doug Howard, VE6CID, tweeted. Another Twitter follower enthused, “You’re running the coolest DX station in the world.” Fallen said he also received “a lot of great waterfalls,” as well as video and audio recordings from hams and SWLs.
Fallen started and stopped each experiment block with DTMF tones, transmitted in AM on or about 2.8 and 3.3 MHz, each channel fed with audio tones of different frequencies or, in the case of music, as a separate stereo channel. If the “Luxembourg Effect” is present, skywave-signal listeners would hear both channels combined on a single frequency; Fallen said the effect is easier to detect with tones. In addition to tones, he transmitted “a ‘dance track,’ a Pachelbel Canon arrangement, and a variation of ‘Row, Row, Row Your Boat.’” Jeff Dumps, KL4IU, composed some of the music, and he arranged and performed all of it.
The CW “airglow” artificial aurora experiment followed the Luxembourg Effect transmissions. All week, Fallen despaired that the “ratty” ionosphere and cloud cover were diminishing his hopes for success with the artificial aurora experiments. But on the last night, he tweeted, “Seeing artificial airglow with the spectrometer. Film at 11.”
Fallen is now evaluating the results of his HAARP efforts. He said one listener posted “a most excellent” YouTube clip. He was not specific; several have been posted that document this week's experiments, including this one from Stephen Oleson, VE6SLP. Laurence Howell, KL7L, in Wasilla, Alaska, posted an audio file.
“The miracle of crowd sourcing!” Fallen said. “If only the Luxembourg Effect was more pronounced, but it is in the 3,300 kHz recording.”
Fallen has been working under a $60,000 National Science Foundation grant. “During campaigns, significant expenditures for fuel and personnel are required,” the grant abstract said. “Large start-up costs make HAARP experiments largely inaccessible to individual researchers unless multiple experiments and funding sources can be bundled together during a campaign of up to two-week duration.” According to the abstract, public participation would maximize “the broader impacts of the investigations.”
“HAARP again...perhaps sometime this summer!” Fallen tweeted on February 23. He has posted additional information on his “Gakona HAARPoon 2017” blog.
(Mike Terry/BDXC)
http://www.arrl.org/news/haarp-goes-classical-during-new-experimental-campaign
(photo/ARRL)