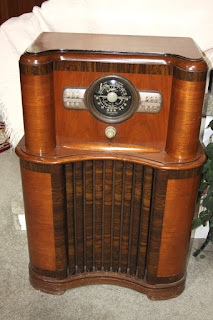 Beginning in the year 1910 and extending over a period of nine years, several student and staff personnel at Purdue University in West Lafayette Indiana experimented with the construction and usage of locally made wireless equipment, though with limited success.  These endeavors were under the auspices of the School of Electrical Engineering for which valid degrees were issued.

However during the year 1918, Purdue University introduced a new class of instruction in radio technology and during the following year (1919) they applied to and received approval from the licensing authorities for the installation and operation of a wireless telegraphy Morse Code station.  This new experimental wireless station was granted an amateur callsign 9YB.
Station 9YB was granted a 2 kW spark license for operation on 800 kHz and 1500 kHz, both frequencies within what became the standard mediumwave band.  Their T type center fed antenna was 100 feet high and 100 feet long.
Then three years later, the amateur Morse Code station morphed into a radio broadcasting station that was granted the callsign WBAA.  The official date for the inauguration of the new WBAA broadcasting station was April 4, 1922.


The original operating channel for the new WBAA was the standard nationwide 833 kHz, and this Indiana station was permitted 250 watts.  These days, WBAA operates with 5 kW on 920 kHz.
According to the WPA Guide to Indiana, station WBAA is the oldest continuously operating radio broadcasting station in Indiana.
Another early wireless station was established by the Dodge Institute at Valparaiso on the edge of suburban Chicago in the top north western corner of Indiana.  Back a hundred years ago, the Dodge Institute was the largest school of wireless and radio instruction in the United States.
In the latter part of the year 1913, the Dodge Institute installed a Special Land Station, as they were called in those days, an experimental Morse Code wireless station with the callsign 9XD.  This station was in use for a dozen years, and it was closed in 1926.
However, give another nearly two score years, and a new station was installed at Valparaiso; a program broadcasting station under the callsign WNWI, with the letters NWI standing for North West Indiana.  The new WNWI was inaugurated on December 31, 1965, the 39th anniversary to the very day of the official closure of the earlier wireless station 9XD.
Radio station WNWI began with 250 watts on 1080 kHz.  However, after 33 years at Valparaiso, station WNWI was reborn (1998) under the same callsign at a new location in suburban Chicago, with now 3 kW on the same channel 1080 kHz.  Studios are at Oak Lawn, the transmitter is at Riverdale, and programming is in East European languages.
The first radio broadcasting station in Indianapolis was established in the Hamilton Manufacturing Company building at 2011 Alabama Street.  This station was launched as 9ZJ  on February 2, 1920, and it broadcast the famous election night results as WLK on November 2, the same night that brought lasting fame to mediumwave station KDKA in Pittsburgh Pennsylvania.  Station WLK was closed in 1923 and the equipment was sold during the following year to station KFGZ-WEMC at what is now Andrews Adventist University at Berrien Springs in Michigan.
The oldest continuously operating broadcasting station in Indianapolis began life on October 23, 1924 as WFBM with studios on the fourth floor in the Indianapolis Athletic Club building at 350 North Meridian Street.  The original transmitter was a converted carrier current unit intended for use in transmitting company messages along the high power electricity lines.
Initially, this WFBM transmitter was installed in the Harding Street electricity generating plant.  They began with 250 watts on 1130 kHz, and they operate now as WNDE with 5 kW on 1260 kHz.
Radio station WSBT in South Bend lays claim to being the first commercial radio broadcasting station in Indiana.  They began life as W9FP in April 1922, and three months later they changed callsign to WGAZ, standing for World’s Greatest Automobile Zone.  They changed call again in 1925 to WSBT to reflect the station’s ownership, the South Bend Tribune.  These days station WSBT operates with 5 kW on 960 kHz though on air they promote their FM outlet on 96.1 MHz which was added  in 2012.
The well known full power 50 kW WOWO in Fort Wayne was inaugurated upstairs at the Main Auto Supply Company on 213 Main Street with 500 watts on 1320 kHz on March 31, 1925.  Their 50 kW transmitter at nearby Roanoke was officially taken into service on February 1, 1954.
In an unusual move, the owners of station WLIB in New York bought station WOWO in Fort Wayne in 1954 so that they could decrease the night time signal from WOWO and increase the night time signal from WLIB.  These days WLIB in New York operates on 1190 kHz with 10 kW during the day and 30 kW at night, whereas WOWO Fort Wayne operates also on 1190 kHz with 50 kW during the day and only 9.8 kW at night.
(AWR Wavescan/NWS 413)
at 11:05 AM