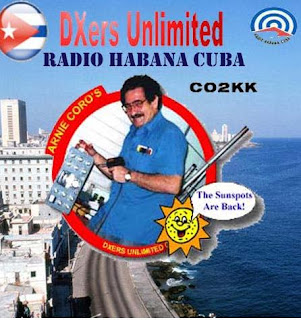 Hola amigos radioaficionados now listening to the weekend edition of Dxers Unlimited, I am your host Arnaldo, Arnie, Coro, radio amateur CO2KK wishing you all good reception of the week end editiom of this radio hobby show . QSL . QSL , YES.... QSL on the air to the many listeners that have sent signal reports and comments to inforhc@enet.cu Some of the reports have also included  mp3 audio files attached to the email messages. Those audio files allow our engineers to appreciate exactly how the station is heard by listeners using our short wave broadcasts.. No doubts that an mp3 audio files  is the most objetive form of reperting the quality of reception amigos !

QSL on the air to listener Claudio Galaz who sent a very interesting report from his location in Chile. Claudio tuned in to the 60 meters tropical band frequency of 5040 kilohertz and he tells us  that the signal, although weak, was easy to listen to because the 5040 kilohertz is on a very clear channel..

By the way I am going too ask Claudio to also monitor Radio Rebelde on 5025 kilhHertz and compare the two signals that originate with the same power of 50 kiloWatts from the Bauta Radio Cuba transmitting station.

Item one :  Solar activity update...yes MORE, bad news, because more than 60 percent of the days of this year 2018 went by without a single sunspot IN SIGHT...From January first of this year and up to December 14, sunspots have been missing for 206 days... and this for sure a fact that continues to sustain the point of view shared by many heliophysicists that solar cycle 24 minimum is now reaching the lowest expected number of sunspots. A monthly update reminder comes from Belgium., where the Royal Observatory confirms the Provisional International monthly mean Sunspot Number for November 2018 : 5.9 (five point nine) , again 5.9  ie the provisional international monthly mean Sunspot number for the month of November.

This very accurate data about solar activity confirms that cycle 24 is very near  its minimum and I may add that more small reverse polarity sunspots are expected from now on, the should appear at higher latitudes of the northern hemisphere of the Sun and show a reverse magnetic polarity that identifies them from solar cycle 24 sunspots that are located now near the solar equator.

Cuban radio amateurs are enjoying now the use of three antennas manufactured in Cuba and sold at a not for profit price by the Cuban Federation of Radio Amateurs... The most popular model is a zero db gain omnidirecional J pole antenna that has proven to provide excellent service as well as supporting hurricane force winds last year. The other two Cuban designed and built antennas are a three elements 6 dB gain yagi, and the other one a six elements Yagi optimized for maximum forward gain that is the favorite antenna among FM 2 meters Dxers.

Yes amigos, two meters band FM mode Dxing is becoming popular in some parts of the world where the availability of multi mode transceivers is simply zero. But, FM mobile units and handie talkies are plentiful, something that makes possible to install better antennas and attempt to try to work far away stations that are not normally available using low gain omnidirectional antennas.

Here in Cuba the 2 meters band is the most used, due to the availability of transceivers used by the professional users within the frequency range between 140 and 160 megaHertz that can be rather easily reprogrammed using a computer to radio interface and the proper software. Some handie talkies are also good candidates for the software conversion making it possible to operate on the 144 to 148 megaHertz frequency range. When connected to a vertically polarized Yagi antenna of at least three elements, the operating range achieved extends well past the typical area that is normally  used for effective communications with  the FM narrowband voice mode.

The main use of the 2 meters band here in Cuba is for local and semi-local contacts, with many radio clubs holding weekly round tables on previously announced frequencies, something that has proven  to be very useful to keep club members informed about relevant activities and also to provide excellent practice for emergency communications

Requests about the circuit diagrams and building instructions the ever popular Arnie Coro's regenerodyne receiver radio keep coming. There are two versions of my  regenerodyne receiver, one is built using vacuum tubes and the one is a hybrid circuit that uses vacuum tubes and solid state devices. The current circuit diagrams also include a design that uses a quartz crystal to feed the mixer with a high stability injection frequency, while another version uses a Franklyn type of self excited local oscillator that is very stable.Send your request for any of the circuits diagrams in our collection to inforhc@enet.cu.

Also receiving requests and questions related to my Super Islander Mark Six  direct conversion short wave receiver keep coming in to my email inforhc@enet.cu And as soon as they are received, it takes just a few seconds to send the electronic reply via the Internet. By the way listeners that have built the different versions of my regenerodyne radio have used them to  form part of a more complex amateur bands transceiver tell me that the project was an easy going task that could be built using standard available parts.

Here is now ASK ARNIE, the most popular section of this program with the reply to the question sent by listener Hugo from Hamburg , Germany, who listens to this show via the streaming audio available from www.radiohc.cu He wants to know more about how to test recycled parts that he has collected from several sources for the past several years. ANSWER: Well amigo Hugo, for testing resistors you only need a good quality digital multimeter.

For testing capacitors you will need not one but several different test instruments, testing electrolytic capacitors requires the use of a special instrument that measures the capacitor's equivalent series resistance, so by using a table of normal values of the electrolytic capacitors of different capacity and voltage ratings, you can discard the bad ones easily.... For measuring inductances now it is possible to buy a new type of digital instrument that provides very accurate measurements of inductances of a very wide range of values.


See you all at the middle of the week  edition on the airTuesday and Wednesday UTC amigos, just after the half hour news bulletin here at Radio Havana Cuba . Send your signal reports, QSL requests and radio hobby related questions to inforhc at enet dot cu or Via Air Mail to Arnie Coro Radio Havana Cuba, Havana, Cuba