The Radio Story in the Smallest Territory in Mainland India 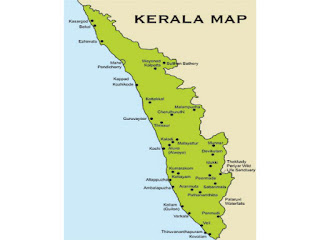 While performing internet research on the Kerala medium wave stations a while back, we came across an item of surprising information.  Surrounded by the state of Kerala on three sides, with the Arabian Sea on the west, is a small territory of just three square miles known as Mahe.  Apart from border irregularities with Pakistan and Bangladesh and Myanmar, this Mahe must be one of the very smallest political territories in mainland India.
This Mahe enclave is geographically, and racially, and linguistically, a part of the territory of Kerala on the west coast of India, though these days it is politically part of a territory some three hundred miles distant, over on the east coast of India at Pondicherry.  This is what happened.

Back in the colonial days the French also (in addition to the English and other European powers) established several trading posts, military forts, and small isolated colonies on the Indian subcontinent.  These extra-territorial enclaves, about a dozen in number, ranged in size from just a small commercial building up to Pondicherry, the major French territory in India, with a total area of about 200 square miles.
All of these once-upon-a-time French territories were absorbed into the Union of India soon after the end of World War 2, and four of these previous enclaves are these days administered directly by the Government of India as a single unit.  Pondicherry is the chief territory, and the three other smaller territories, Karaikal, Yanam and Mahe are linked with the administration in Pondicherry.
The French enclave of Mahe on the west coast of India was generally part of the French empire right up until the year 1954.  At this stage, Mahe was taken over by India, seven years after British India was accorded independence as the Union of India.  These days, this Mahe is considered to be part of ex-French Pondicherry, and hence, under the Union government of India, it is administered by Pondicherry as part of a Union Territory.
The ex-French enclave of Mahe is located on the west coast of India, towards the northern end of the Indian state of Kerala.  It is just a small territory of some 3 square miles at the mouth of the Mahe River and it is surrounded by the state of Kerala on three sides and the Arabian Sea on the west side.  Mahe has a resident population of some 41,000, and three languages are recognized as official languages; Malayalam, French and English.
Major radio coverage for the small enclave of Mahe is provided by the 50 mile distant All India Radio station at Kozhikode or Calicut as it was known under the British.  This powerful mediumwave station emits 100 kW on 684 kHz over a wide area, and thus it provides a good signal into Mahe also.
However, there is indeed a small radio station in Mahe, or more exactly, in New Mahe, just across the river from Mahe itself.  This small community radio broadcasting station is housed in the Post Office Building in New Mahe and it is operated by the Academic & Technical Education Development Society.  Community FM station Radio Janvani operates on 90.8 MHz with just 50 watts.
In addition in the state of Kerala, there are more than 40 FM stations, three quarters of which are on the air as community radio stations.  AIR All India Radio also operates a dozen FM stations, five of which provide coverage in regional cities, and in shadow areas as slave relay stations.
Thus far in our sequential features regarding the mediumwave scene within the Indian state of Kerala, we have presented the story of their four mediumwave stations.  In a list of mediumwave callsigns in India as published during the year 2011, it becomes apparent that a three letter callsign is composed with the first two letters VU for India, followed by a third letter, which is the first letter in the name of the city.  Where there is more than one city whose name begins with the same letter in the English language alphabet, then a suffix number is added.
The four mediumwave stations in the mainland state of Kerala can be shown in this way, with the old and the current city names:-


QSL cards verifying these four mediumwave stations can be obtained from AIR headquarters in Delhi, and QSL letters may be obtained from each of the mediumwave stations in Kerala for reception reports sent direct to the station.
However, in addition to these four mediumwave stations as listed above, there is also one other, and it is located on a nearby island where the Keralese language Malayalam is spoken.  This territory, the Lakshadweep Islands, is associated with Kerala, though it is officially a union territory under the direct administration of the central government in New Delhi.
On one of these islands is another mediumwave station operated by AIR All India Radio, and that will be our story on the next occasion when we present information on the radio scene in India.
(AWR Wavescan/NWS 509)
at 10:00 AM