The Shortwave Scene in Canberra, “The Kangaroo Capital in Australia” 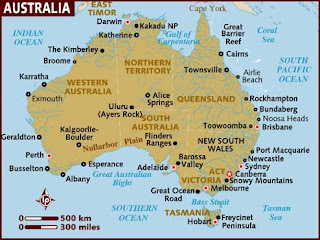 Back last month, we presented a topic here in Wavescan that told the story of the invasion of Kangaroos into the suburban areas of Canberra, the national capital of Australia, during the current Great Australian Drought.  Along with that interesting information, we also presented the story of the mediumwave stations in the national capital.  Let’s take a look now at Canberra on shortwave.
On the shortwave scene, there has only ever been just one major shortwave station in Canberra, and that was a navy wireless station that was on the air worldwide with communication traffic.  However, available evidence would suggest that there was a small temporary naval wireless station in the area in advance of the new high powered wireless station.
The callsign for this preliminary station was apparently VHK.  Perhaps this station was located at what became the first receiver station for HMAS Harman at Belconnen.  This first and somewhat temporary receiver station was installed in a hut at Red Hill, ¾ mile behind what became the main transmitting station.
Construction work for the big new transmitter station at Belconnen, near Canberra, began without publicity in 1938.  Known in navy parlance as HMAS Harman, the wireless station at Belconnen  was planned for usage in not only naval communications worldwide, but also as a wartime backup for the Rugby wireless station in England, if needed.
As the station was nearing completion during the following year (1939), and on subsequent occasions also, rumors suggested incorrectly that this station might also be used as the transmitter base for the planned shortwave service of Australia Calling/Radio Australia.  The Belconnen station was officially opened on April 22 in that critical year 1939, and the first operational transmission as a navy communication station was made six months later.
The original transmitter was a high powered longwave unit, radiating from a very tall antenna system suspended from three towers 600 feet high and a quarter mile apart.  As time went by, a cluster of shortwave transmitters was also installed, and a bevy of curtain and rhombic antennas was also erected.
At the height of its operation, the transmitter station at Belconnen contained 38 shortwave transmitters ranging in power from 10 kW to 40 kW, with 50 antenna systems, though most dominant in the skyline were the three tall longwave towers.  Three receiver stations associated with the transmitter station were located progressively at three different sites nearby to Canberra; Red Hill, Fyshwick & Bonshaw.
This huge communication station was progressively decommissioned, withdrawn from service, finally closed in mid 2005, and then demolished, thus making way for a new housing development in suburban Canberra.  The functions of the station were progressively transferred to a new navy communication station located further inland, near Albury, on the Murray River in New South Wales.
During its more than 66 years of service as a major communication radio station, Belconnen was on the air under at least three different communication callsigns, and these were:-
VHP   Navy communication
VIS   Communication with commercial shipping
VIX   Weather & shipping information

In addition, the Belconnen station was also noted over a period of time with time signals on three different shortwave channels with a power of either 5 kW or 10 kW under the callsign AXM.  These signals were provided from Melbourne and they were needed on shortwave as a fill in basis after the Australian chronohertz station VNG at Lyndhurst was closed in 1987.  Station AXM was on the air for twelve years, stretching from 1987 - 1999, and they verified with a nice oversized QSL card.
The first known usage of the Belconnen radio station for the broadcast of radio programming occurred in the year 1956, and this was on the occasion of the Olympic Games in Melbourne Victoria.  All available shortwave transmitter space in Australia was pressed into service to ensure that adequate radio coverage could be provided for all foreign radio media covering the sporting events in Melbourne.  It is reported that the navy communication station at Belconnen in the Australian Capital Territory was also in use for the relay of radio news and commentaries to other overseas countries during these Olympic Games.
In 1991, a small temporary studio was installed in Canberra by the navy for the production of radio programming for broadcast to Australian service personnel on duty in the Middle East, Asia, Africa and at sea.  Initially, this programming was on the air as the Gulf Link Service and it was relayed by Radio Australia Darwin to the Arabian Gulf area in May 1991.
Five months later however, the Belconnen transmitters began to carry this service, and the Darwin relay was subsequently discontinued, in May 1993.  The Australian Defence Forces Radio programming was on the air consecutively under three different callsigns: 2AAFR,  AAFR and ADFR.
For a short period of time during the year 1999, the Belconnen station was heard on air with a relay of the ABC programming service known as 2 Triple J, that is 2JJJ from their studios in Sydney.
It should also be noted that programming from the Canberra studio was relayed by the navy transmitting station located at North West Cape in Western Australia.  On some occasions, the programming was separate, and sometimes it was in parallel with the Belconnen broadcasts.  The broadcast of radio programming from Belconnen ended in 1999.
The large and powerful navy communication station at Belconnen in Australia’s Capital Territory made its last transmissions on May 31, 2005, and the entire facility was demolished in December 2006.
The station is now gone, and it has been replaced by suburban housing.
However, many international radio monitors in many countries throughout the world hold historic memories of this station in their collection of QSL cards and letters.  Cards have been issued over the years for the several callsigns in use at Belconnen, including VHP, VIX, VIS, AXM, 2JJJ and the navy broadcasting service itself.
(AWR Wavescan/NWS 508)
at 9:00 AM