Back to the Radio Scene on the South Pacific Chatham Islands 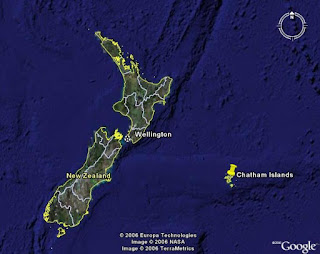 Several weeks back, we presented our opening topic, on the radio scene on the isolated South Pacific Chatham Islands.

The radio story in that the presentation featured the Maritime Wireless/Radio Station under the consecutive callsigns VLC and ZLC during the era from its inauguration in 1913 until it was officially closed in 1991.

Interestingly for the past many years, a postal style cancellation identifying Radio Chatham Islands has been listed for sale on eBay and it is still available to this day.  The clearly marked cancellation date is March 23, 1916 when the station was just three years old, and the asking price is $130.

The date for the official closure of station ZLC near Waitangi Beach on Chatham Island is listed in the government files in New Zealand, some 500 miles distant, as August 30, 1991.  At the time, the local fishermen in the Chathams bewailed the loss of this important radio communication service.

The historical files in New Zealand do not show the station in use after that time, though as far as is known, the the station is still on the air under the authority of the New Zealand government to this day.  Interestingly, various listings as shown in radio publications in different parts of the world in this subsequent-era show its various operating frequencies and callsigns..

Although we have made contact with local officials on Chatham Island, no return information has been received.  The only answer to this puzzle would seem to be that the station, still under national New Zealand registration, was taken over by local authorities on the island.  Maybe some of the well-known international radio monitors in New Zealand can provide an answer.

Back during the 1950s, Maritime ZLC was in use also for daily communication with a network of several other smaller stations scattered throughout the Chatham Islands.  At the time, half a dozen shortwave transmitters were available at ZLC for various local and regional communication purposes.

A self-prepared QSL card dated in 1954 shows a total of five regional communication stations in the Chathams and these were listed as  ZLEC  ZLEG  ZLBE  ZMWO and ZLDD.  It is known that one of these stations was installed at Kaingaroa, near the elementary school on the northeast coast.

A community FM radio station, Radio Weka was inaugurated on December 11, 1991, with 25 watts on 92.1 MHz under the callsign 3WKA.  The identification slogan of this station, Radio Weka honors the local Weka Bird that has the unusual the habit of giving cooee call each morning and evening as a male and female duet.

Kiwi DXer Arthur De Maine visited the Chatham Islands last year (2020), and he states that a local FM station was indeed on the air, though somewhat intermittently, with the identification of the slogan, The Sound, on 89.3 FM.  So, although Radio Weka is no longer on the air, this current FM station would seem to be a revival of the local community station, and perhaps using The Sound, which is a New Zealand network, as a sustaining service.

An official repeater station for Radio National with a program relay from New Zealand was also on the air for a while on FM 89.7 MHz.  There was also a local TV station on the air in Waitangi though it was closed when satellite TV became available.

Over the years there have been half a dozen amateur radio stations on the air at Waitangi and the operators were usually associated with the Maritime Communication Station ZLC.  During the era before World War 2, the Chatham amateur prefix was ZL2, such as with ZL2XL in 1933; and in more recent time the prefix has been ZL7 such as with ZL7STU last year (2020).

The second-largest island in the Chatham archipelago is Pitt Island and the only other island that is inhabited approximately 10 miles by 4 miles, with a population of less than 40.  It is more rugged than the 12 miles distant Chatham, and it was named in honor of the same William Pitt who was the 1st Earl of Chatham after whom the Chatham Islands were named.  The callsign for the small communication station on Pitt Island is ZLET. (AWR/Wavescan 623) photo NASA