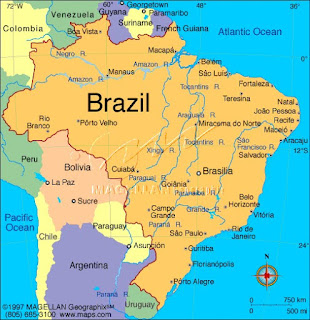 The huge South American country of Brazil is a nation of many superlatives. It is the world’s fourth-largest country with 3.2 million square miles and a huge population of 212 million people.  Its people speak 228 different languages, 217 of which are native tribal languages.
Some authorities claim that the Amazon River is the world’s longest river, stretching more than 4,000 miles inland from the Atlantic coast.  Large ocean steamers can ply the Amazon River for a thousand miles inland, and smaller ships can ply another thousand miles further. This huge river system disgorges fresh water at the rate of 18 million tons every minute, sending it out for a distance of 250 miles into the Atlantic Ocean.
The dramatic Iguazu Water Falls lie at the border between Brazil, Argentina, and Paraguay.  The water at Iguazu plunges from a height of more than 200 feet, higher than the famous Niagara Falls.  These South American Falls stretch across the landscape for more than a mile; in the season the water tumbling over the edge of the cascading cliffs at Iguazu is greater in volume than more than all of the other major waterfalls throughout the world combined, and the thunderous tumultuous roar from Iguazu can be heard for miles.
There are more than 2,500 airports in Brazil, and the major airport at Sao Paulo processes 20 million passengers each year.  Then too, a total of 6 million tourists from a multitude of foreign countries flow into Brazil each year.  Spectator sports rank high in Brazil with huge attendances at for example, football games, volleyball and basketball, and also at car racing.
In addition to so many superlatives, Brazil is also a manufacturing giant, though each factory is generally smaller than a similar counterpart in the United States.  Brazil manufactures two million motor vehicles each year, as well as airplanes, medications, chemicals, paints, clothing, footwear, processed foodstuffs, and just about everything else, you name it.
The most populous cities in Brazil are Sao Paulo with 22 million, and nearby Rio de Janeiro with 13 million, both of which are Atlantic coastal cities.  The national capital is the beautifully designed and carefully constructed inland city of Brasilia with its nearly 5 million residents.  The very name Brazil is taken from the Brazilwood Tree which provides a dark red dye for the textile industry.
Around the time of the arrival of the first Europeans from Portugal 500 years ago, it is estimated that the total population of Brazil was already 11 million, made up of some 2,000 local Indian tribes.  And yes, they do call the tribal people of Brazil Indian; to differentiate in Portuguese the people of the Asian country India are called Indianos, though that same word in Spanish is used to mean native Americans.
The current understanding of patterns of human migration is that most of the original inhabitants of all of the Americas including South America and Brazil itself migrated from Siberia across the Bering Straits into Alaska.  As they multiplied over the years, then their descendants fanned out into all of the lands of the Americas.  A study of their languages indicates though that the tribal populations in the Americas are not descendants from just one original tribal migration.  It is estimated that in Brazil alone, there are still 67 uncontacted tribes in the interior jungle areas.
As the Portuguese settlers increased in number, there was continuing and escalating friction between the original inhabitants and the new European colonial settlements, sometimes breaking out into actual warfare.  Brazil, along with so many other European colonies in the Americas, Africa, Asia and the Pacific, did not have a good humanitarian record regarding their dealings with the original inhabitants in their territories.
In addition to the majority Portuguese populations in Brazil, there are also several minor settlements established by migrating foreigners, some of whom still speak their original homeland language.  Among these foreign settlements, it is estimated there are communal settlers from 60 different countries in Europe, Africa, and Asia.
Brazil declared independence from the Kingdom of Portugal on September 7, 1822.  At the beginning of World War 1 in Europe in 1914, Brazil initially declared neutrality.  However, due to the several occasions in which German submarines sank Brazilian ships in the Atlantic, Brazil declared war against the Central Powers of Europe on October 26, 1917.
Again, at the beginning of World War II, Brazil declared neutrality, but due to the many occasions once more when German and Italian submarines sank Brazilian shipping in the Atlantic, again Brazil declared war against the Axis Powers of Europe on August 22, 1942.
Radio broadcasting in Brazil began almost a hundred years ago on 7 September 1922, with a speech by the then President Pessoa, and it was formalized on 20 April 1923 with the creation of the Radio Society of Rio de Janeiro.  However, before that, there was an era of wireless experimentation, and there was also the installation of the early communication wireless transmitters.
More about the early radio scene in Brazil next time.
(AWR/Wavescan NWS 626)
at 11:29 AM