Happy New Year Around the World ! 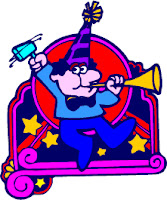 Looking to bring in the new year, as you travel round the world ? Monitoring Times can help you as you traverse the globe in 24 hours. Happy New Year Around the World in 24 Hours, can be found at http://www.monitoringtimes.com/Around-in-24-hrs.pdf One caution though, don't toast each new hour as you may not make the full 24 hour journey!
More New Years programming is posted at Fred Waterer's website at: www.doghousecharlie.com/christmas-programming/

For Roy Forbes fans, you may want to swing over to Alberta radio station, CKUA (available on the internet at www.ckua.com) He has a one hour show called Roy's Record Room at 6 pm MST (8 pm EST) on Mondays. This week he has special broadcast from 8 to 9 MST on New Year's Day. (John Fisher/ODXA)
New Years Eve Extended Broadcast HoursRadio Ferrymead 1413 AM Christchurch NZ
A possible long distance 'DX' catch for listeners in Australia and North America is RadioFerrymead in Christchurch, New Zealand. It will stay on air until after midnight local time [1100 UTC] on December 31 with traditional New Years Eve programs of music, celebrations,midnight countdown.The format is nostalgia, so the music will range from 1930's-1970's and nearly all music is broadcast using original 78, 45 and 33 rpm recordings.A well maintained 1kW transmitter running at proper modulation levels and a well engineered tower on swampland by the coast and two river estuaries combine to give Radio Ferrymead a clear 'old fashioned' signal.The station is run by volunteers, including ex-broadcasters and amateur radio enthusiasts.Radio Ferrymead also uses the ID '3XP' as a throwback to previous decades when NZ stations used callsigns. 'Your love affair with yesteryear'. The other NZ station on 1413 is NewstalkZB in Tokoroa which usually runs a nostalgia program on Sunday nights as well so listen carefully!Happy New Year 2007 from the team at the Radio Heritage Foundation, You can find us at 1. www.radioheritage.net(HCDX)
Hamburg Lokalradio New Year programming Germany's non-commercial station Hamburger Lokalradio, has planned special new year's programming on Jan. 1st. Thereafter, the station plans to broadcast from January 8, on each Sunday throughout 2007. The station broadcast on 6045 kHz at 1100-1200 UTC.Hamburg Lokaradio airs via T-Systems International via Julich, Germany using 100 kW, monopole verticle cache antenna, nor-directional to Europe.
Reception reports are welcomed, with return postage, addressed to:
Hamburger LokalradioKulturzentrum LOLA21031 Hamburg, GermanyE-mail: redaktion @ hamburger-lokalradio.de(Source: Michael Kittner, Stationsleiter HLR(via Dr. Hansjoerg Biener-D, wwdxc BC-DX Dec 17)
So there you have...that should keep you busy bringing in the New Year from around the globe!
GVH
at 4:25 PM