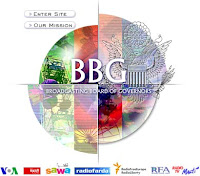 The US Broadcasting Board of Governors (BBG) has implemented ’surge broadcasting’ in Georgian in response to the continuing crisis in the breakaway province of South Ossetia. News and information from the Voice of America (VOA) and Radio Free Europe/Radio Liberty (RFE/RL) reaches audiences in Georgia via shortwave radio, in-country FM broadcasts, television, and the Internet.
Radio Free Europe/Radio Liberty (RFE/RL) added an additional hour of radio programming in Georgian for a total of four hours each day beginning August 11, 2008. Programs are now broadcast both via local FM and shortwave. RFE/RL continues to provide first-hand accounts of events from journalists on the ground including continuous live blog updates from the city of Gori tracking Russia’s actions following its pledge to withdraw military forces. RFE/RL also provides a one-hour weekly television program via Georgian Public Broadcasting.
On 9 August, 2008, the Voice of America’s (VOA) Georgian broadcasts increased to one hour from a half-hour daily in the wake of fighting between Georgia and Russia. Broadcasts, including reports from inside the country, are carried on an FM network as well as on shortwave radio. As of yesterday, the programme are repeated on shortwave at 1700-1800 UTC [no frequencies listed on VOA website at time of this posting]. News in Georgian is also available on the Internet at www.VOANews.com/Georgian.
The Administration’s FY 2008 budget, as approved by Congress, provided that all BBG broadcasting to Georgia was to be done by RFE/RL after September 30, 2008. However, given the critical nature of events in Georgia, this week the BBG approved continuation of VOA Georgian surge broadcasts for the foreseeable future.
(Source: Broadcasting Board of Governors/R Netherlands Media Network Weblog)
at 8:00 AM