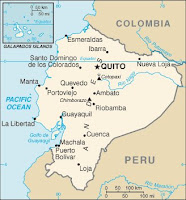 Ecuador has ordered television and radio stations to transmit government programmes that inform the public about a plan to reform the constitution that will bolster President Rafael Correa’s powers. In a letter, the education ministry told the country’s media watchdog to enforce a law that obliges private radio and television stations to broadcast up to one hour of state-run educational programming every day. It was not clear what sanctions broadcasters could face if they do not transmit the spots.
Short programmes will be broadcast three times a day, sometimes during prime-time, and would likely help Correa rally support before the 28 September referendum for a constitution that would give him greater sway over the economy. The leftist leader is inching closer to the 50 percent majority he needs to pass the reform, recent polls show. “We consider the broadcasting of the proposed constitution crucial for the citizens’ education,” the ministry said in the letter. The ministry said programmes should start today.
Some broadcasters said they feared the government could use the programmes for electoral purposes, and were evaluating whether to obey the order. ”I’m talking to the owners of concessions and they think it is a very odd (order) amid an electoral process,” Nicolas Vega, the head of an association of private television stations told Reuters. “We are still evaluating the order.”
Correa launched a public television and radio station this year and already broadcasts messages to the public via private TV and radio stations several times a week. Opposition politicians say Correa wants to increase state intervention in the media and accuse him of seeking dictatorial powers via the proposed constitution, which allows him to run for reelection once after one term.
Correa, who took office last year with a pledge to wrench power from old elites, has clashed repeatedly with the media. He accuses journalists of bias against him and says they protect the interests of economic groups opposed to his government. The 44-year-old US-trained economist, who is sometimes criticized for his abrasive style, even ejected a journalist from one his radio shows last year.
In July, Correa seized two national broadcasters as part of a mass confiscation of more than 200 companies owned by a local business group over a debt dispute with the state stemming from the late 1990s. The confiscation raised fears of state intervention in the media but was cheered by many in Ecuador who blame the companies for a decade-old banking collapse. If approved, the new constitution would bar bank owners from holding stakes in media outlets.
(Source: Reuters)
(Source: R Netherlands Media Network Weblog)
at 3:48 PM