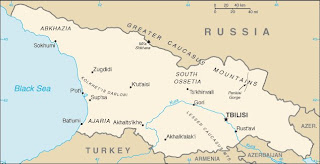 The Committee to Protect Journalists (CPJ) has urged the Georgian government to stop blocking Russian broadcasts and websites. According to the Moscow-based radio Ekho Moskvy, Russian Television International (RTVi) was cut off after it aired Ekho Moskvy’s interview with Russia’s Foreign Minister Sergei Lavrov on the conflict in South Ossetia and the future of the relationship between Russia and Georgia. In the interview, Lavrov supported the Russian incursion into Georgia, and called for Georgian President Mikhail Saakashvili to step down.
RTVi is a New York-based independent Russian-language broadcaster that broadcasts via satellite; its programmes in Georgia are transmitted by local cable companies. The station was accessible in the Georgian capital, Tbilisi, and in the cities of Poti, Batumi and Telavi.
RTVi News Service Director Georgy Tsikhiseli told CPJ that the Cable TV Union of Georgia informed an RTVi representative in London yesterday that Georgia will cease broadcasting its programmes from 1 September because of Russian aggression against the country. However, RTVi has actually been blocked in Georgia since Monday. Tsikhiseli said it was shocking news for the company because it believes it supported the Georgian authorities and condemned Russia’s decision to begin military actions in Georgia.
“They slapped us in the face, and we did not deserve it,” Tsikhiseli told CPJ. “We reported on the conflict and tried to be as objective as possible - when airing reports from Russia we did not comment on them, but rather referred to Russian actions as aggression. It is an act of censorship, nothing less than that.” Tsikhiseli said the company is calling on the Georgian authorities to intervene. CPJ tried to reach the Cable TV Union of Georgia for comment, but calls went unanswered
According to the Moscow Times, Georgian authorities have also been blocking Russian news channels Rossiya, Channel One, and NTV, as well as websites with .ru domains since 9 August. Zviad Pochkhua, editor-in-chief of the Tbilisi-based English-language newspaper The Financial, told CPJ that Russian news sites are accessible only via proxy servers, and that Russian news channels have been blocked since last week due to “biased reporting and propaganda.”
(Source: Committee to Protect Journalists/R Netherlands Media Network eblog)
at 4:45 PM