On the Air and Off the in Sweden - Part 2 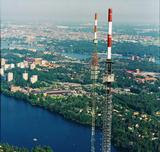 In our program today, we continue on from where we left off two weeks ago in the story of shortwave broadcasting in Sweden. As you will remember, this topic was suggested by Claes Englund in Sweden and Bruce White in Australia.
After things settled down in Europe in the middle of last century, Sweden placed an order with the Marconi company in England for the purchase of two shortwave transmitters at 100 kW each. These two units were installed at the already existing radio station located at Horby which had been erected in 1928, and they were inaugurated in 1952.
Some 20 years later, two high powered shortwave transmitters rated at 500 kW each were installed at Horby. However, due to coronal arcing in the antenna system during foggy weather, the power level of these units was reduced to 350 kW.
At the same time as the shortwave facilities at Horby were increased, a similar project at Karlsborg took place. This station was originally established back in 1918 as a spark wireless communication facility. A 500 kW transmitter was installed in the 1970s, and the output of this unit was also reduced to 350 kW due to the coronal arcing problem in the antenna systems.
As we are aware, Sweden closed down its two shortwave stations, Horby & Karlsborg, and the one remaining mediumwave station at Solvesborg, at the end of October. Nationwide coverage on radio in Sweden is now obtained with several networks of FM stations totaling anywhere up to 2,000 transmitters.
Over the years, there have been two additional radio stations of interest in Sweden. A large communication station known as Goteborg Radio traces its earliest origins back to the year 1905. This station was progressively located at four different sites over the years, and it has been well known under the callsigns SAG & SAB.
The other interesting station is the old spark wireless station at Grimeton which was inaugurated in the 1920s by King Gustav 5. The old long wave Alexanderson alternator is still functional, and it is placed on the air once each year under the callsign SAQ.
Radio Sweden was a prolific verifier of reception reports and we are aware of at least 50 different designs for their QSL cards. Likewise, many QSL cards have been issued for the old longwave transmitter SAQ, and for Goteborg Radio SAG & SAB.
We should also remember the long running DX program from Radio Sweden, “Sweden Calling DXers”. The script for this program began with Arne Skoog in 1948, the program was taken over by the American George Wood in 1978, the name was changed to MediaScan a few years later, and the program ended in 2001.
This then, is the story of shortwave broadcasting in Sweden, running from 1938 - 2010.
(AWR Wavescan/NSW95 via Adrian Peterson)
at 7:58 PM