A Voice from the sky in Mysore India 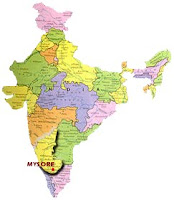 Before we begin the Mysore story in this edition of Wavescan, let us return to the story of radio broadcasting in Hyderabad. You will remember that back in August we presented two major features
on the history of radio broadcasting in Hyderabad Deccan, one of the major cities on the Indian plateau.
Jose Jacob VU2JOS at the National Institute of Amateur Radio informs us that All India Radio Hyderabad has launched a campaign to collect as much archival material as possible in connection with their Diamond Jubilee. They are interested in hearing from anyone who had connections with the station in its early years, and they would like to have access to printed materials dating way back to the very early days of their station.
OK, and now, on to the Mysore story. The city of Mysore in south India is the second largest city in the state of Karnataka. It is located about 80 miles south of the state capital Bangalore.
The history of Mysore goes way back into the era of Indian mythology, and the earliest known written report is dated 245 BC during the reign of King Ashoka when the city was known as Mahishur. During the early times of the British raj, Mysore town was the capital of the kingdom, under the Maharajah of Mysore.
The city of Mysore these days is a tourist attraction, and two of the major items of interest are the beautiful Brindavan Gardens and the fabulous palace of the Maharajah. The Brindavan Gardens, covering 150 acres, were set out in 1924; and the Maharajah’s palace was constructed in 1912.
Back around ¾ of a century ago, a shortwave broadcasting station was established in the city of Mysore under an amateur callsign, VU7MC. Interestingly, there was another amateur broadcasting station in Mysore, located at Akaskivaria and it was on the air under the callsign VU7MD.
This station was heard in the United States with three hours of broadcast programming on a somewhat irregular basis during the year 1936. The frequency in use was 4270 kHz. The news items about station VU7MD are found in several issues of the radio bulletin published by the International Shortwave Club in the United States.
The same issues of ISWC also state that broadcasts from other Indian stations were heard during this same era. Now, if there were two Indian stations in Mysore listed under the callsigns VU7MC & VU7MD, then we would presume that there were at least two others, with the earlier sequential callsigns, VU7MA & VU7MB.
The 50 watt amateur broadcast station VU7MC was inaugurated with a special program of music and poetry on September 10, 1935. The station was located in the suburban home of Professor M. V. Gopalaswamy, and the available evidence would suggest that it was a small shortwave facility.
Apparently station VU7MC was moved into the palace of the Maharajah of Mysore two years later where it was on the air again with the broadcast of radio programming. Monitoring reports, as heard in the United States at the time, list VU7MC as the “Mysore Palace” station, and it was noted on 6080 kHz in 1937, and on 6590 kHz in 1938.
On the occasion of the 4th anniversary of station VU7MC, a new transmitter facility, rated at 250 watts was inaugurated, still at the palace of the Maharajah. However, two years later, the station was handed over to the city government of Mysore; and on January 1 of the following year, 1941, the station was taken over by the state government of the Maharajah of Mysore.
Two years later, Professor Gopalaswamy retired. He was the original founder of the station and he had continued on in government service as the music director for the station. A painting was later commissioned in his honor.
The station was apparently silent during the latter part of World War 2, and it was revived again around September 1945. Soon afterwards, station listings show that radio station VU7MC was operating on both mediumwave & shortwave. Mediumwave was shown with 30 watts on 968 kHz and shortwave on 6065 kHz with 300 watts.
Around this era, the Mysore shortwave station was listed with 5 kW, but this seems to be an intended plan that was never implemented.
Interestingly, entries in the World Radio Handbook for the years 1951, 1952 & 1953 show the Mysore station under a regularized callsign, VUM7, instead of VU7MC. It should be remembered that the callsign for the AIR station in Madras was also VUM during that era.
However, we understand that the station in Mysore was actually closed in 1950, and the equipment was transferred to Bangalore where it was re-installed, and it was inaugurated five years later on November 2, 1955.
Radio returned to Mysore almost 20 years later when a 1kW mediumwave transmitter was activated on 1602 kHz. However, these days there is no mediumwave nor shortwave station in Mysore, but instead there are just three official stations all on air in the FM band.
During the past month of September, All India Radio in Mysore remembered its earliest origins in a series of programs and events honoring its Platinum Jubilee.
In addition to the unique radio service offered to Mysore and beyond by the unusual shortwave and mediumwave station in this princely state, Mysore has one other honor. During its 15 years of service, station VU7MC was identified on air with the Indian designation, “Akashvani”, a term derived from the ancient Sanskrit language meaning literally, “sky voice”. This identification was subsequently adopted nationwide by All India Radio in all of its official languages in the year 1956.
There are no known QSLs verifying the reception of station VU7MC, the voice from the sky in Mysore India.
(AWR Wavescan/NWS 94 via Adrian Peterson)
at 1:10 PM