Radio Free Asia (RFA) announces the release of our 42nd QSL card. This is the seventh QSL card commemorating 2011 as RFA’s 15th anniversary. RFA’s first broadcast was in Mandarin Chinese on September 29, 1996 at 2100 UTC. Ms. Libby Liu has been the president of Radio Free Asia since 2005. As president, Ms. Liu provides strategic and operational direction to meet RFA’s mission of providing balanced, objective news to listeners in East Asian countries where such news is unavailable. Acting as a substitute for indigenous free media, RFA concentrates its coverage on events occurring in and/or affecting the countries to which we broadcast. This QSL card will be used to confirm all valid reception reports for December 2011. Learn more at www.rfa15.org. 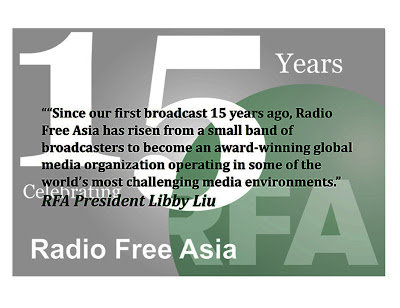 RFA is a private, nonprofit corporation that broadcasts news and information to listeners in Asian countries where full, accurate, and timely news reports are unavailable. Created by Congress in 1994 and incorporated in 1996, RFA currently broadcasts in Burmese, Cantonese, Khmer, Korean to North Korea, Lao, Mandarin, the Wu dialect, Vietnamese, Tibetan (Uke, Amdo, and Kham), and Uyghur. RFA strives for accuracy, balance, and fairness in its editorial content. As a ‘surrogate’ broadcaster, RFA provides news and commentary specific to each of its target countries, acting as the free press these countries lack. RFA broadcasts only in local languages and dialects, and most of its broadcasts comprise news of specific local interest. More information about Radio Free Asia, including our current broadcast frequency schedule, is available at www.rfa.org .
RFA encourages listeners to submit reception reports. Reception reports are valuable to RFA as they help us evaluate the signal strength and quality of our transmissions. RFA confirms all accurate reception reports by mailing a QSL card to the listener. RFA welcomes all reception report submissions at www.techweb.rfa.org (follow the QSL REPORTS link) not only from DX’ers, but also from its general listening audience. If you have a smart phone, feel free to use the QR code below to access the automated reception report system and submit your reception reports to the web site.

Upon request, RFA will also send a copy of the current broadcast schedule and a station sticker.
(A.J. Janitschek/RFA)