In Yakutia, a powerful resume broadcasting 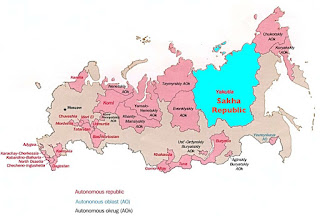 The Republic of Sakha (Yakutia)

One of the most common questions posed by the inhabitants of the northern regions of the republic at the time of the Report of the Republic of Sakha (Yakutia) - a powerful renewal of broadcasting, at the time covering the entire territory of the republic. So, over the years distant broadcasting public radio stations in our country has been almost completely phased out. In all these cases the reason for the far off broadcasting was a reduction of public funding, to represent the company VGTRK for this purpose. The country found a solution to the issue of broadcasting on the territory of the Arctic and northern regions of Yakutia.

Recall that in 2011, RTR was decided to terminate the radio broadcast of "Radio Russii" in the range of short and long waves. Further more RTR took a number of decisions that led to the cessation of broadcasting radio "Mayak". Thus, on the whole territory of the Russian Federation ceased broadcasting in LW, MW and SW.

"This is the most affected Indigenous Peoples of the North, leading a traditional nomadic way of life, as well as professional hunters, fishermen, agricultural workers, and many others, that, in fact, deprived them of one of the main sources of information. Today on the territory of Yakutia is being broadcast radio in the FM-band. This technology is based on the principle of high-quality broadcast radio signal within the boundaries of settlements. By virtue of geographic specificity, in vast areas of our country it is impossible to catch the signal, except for foreign radio stations. Because, despite the lower quality broadcasting, HF broadcasting as we demand ", - said the Minister of Communications and Information Technologies of the Republic of Sakha (Yakutia) Alexander Borisov.

To resume powerful broadcasting in the Arctic and northern regions of the republic, it is planned to use short-wave transmitters "Grom-100” ("Thunder-100") and “Viyuga - 250” ("Blizzard-250"), one of the most powerful in the north-east of Russia, earlier broadcasts of "Radio Russii". To do this, you must transfer them to the new frequency, receiving the corresponding license for the use of radio frequency channels, as well as to receive a broadcast license for NBC "Sakha", and most importantly, resolve all financial issues.

Transmitters located in the suburbs of Yakutsk (p. Tulagino) belong to Federal State Unitary Enterprise "Russian Television and Radio Broadcasting Network", and are in conservation. The company is currently engaged in registration of a license to operate in the field of communication services and permits for use of radio frequencies by means of radio transmitters "Grom-100” and “Viyuga - 250”.

Broadcasting will be engaged in "Sakha" NEC with 10-hour broadcasting grid. At the meeting of the tender committee of the Federal Radio and Television, which was held in Roskomnadzor Russian Federation in Moscow on 27 January this year, a positive decision on this issue. Interests Yakutia before the Commission was represented by the Minister of Communications and Information Technologies of the Republic of Sakha (Yakutia) Alexander Borisov and CEO of NBC "Sakha" Ivan Androsov.

Upon receipt of all licenses and permits will be renewed in Yakutia powerful radio transmitters and "Grom-100” and  “Viyuga - 250” work in full force. In the zone of the radio broadcast will include 27 districts of the country, including 13 of the Arctic and northern regions. The area of ??coverage will be 2,440 square kilometers, accounting for 78% of the total area of ??the country. Thus, in the second half of 2016 most of the republic will be able to listen to radio broadcasts of NBC "Sakha" in the villages, the forest, on the road, and even reindeer pastures, the press service of the Ministry of Communications of Yakutia.
www.dxing.ru / http://www.sakha.gov.ru/news/front/view/id/2608127
Anatoly Klepov-RUS-DX # 860)