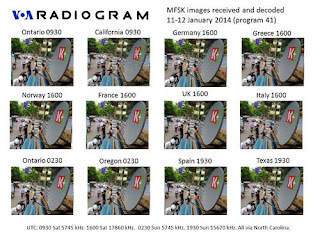 DigiDX is a new service providing DX news in MFSK32 via Channel 292 in Germany, 6070 kHz, 10 kW.  The DigiDX test transmissions last weekend were mostly successful despite China Radio International and other stations on the same frequency at various times.

DigiDX MFSK32 transmissions will resume this weekend via Channel 292, 6070 kHz. One will be Sunday at 0200 UTC (Saturday 9 pm EST), with possible reception in the Americas. The other will be Sunday at 1100 UTC. You might hear DigiDX MFSK32 transmissions at other times during the weekend on 6070 kHz, and possibly via Radio 700 on 3985 kHz. Consult the DigiDX Facebook page, https://www.facebook.com/digidx, and its Twitter account, https://twitter.com/Digi_DX .

The Mighty KBC will transmit a minute of MFSK32 Sunday at about 0220 UTC (Saturday 9:20 pm EST) on 6040 kHz, via Germany. Yes, I know this conflicts with the DigiDX transmission this weekend. We will try to harmonize the digital mode schedules in future weeks. Reports for KBC reception and decode to Eric: themightykbc@gmail.com .

Thanks for an increasing number of reports, including many new reports from Germany, where an article about VOA Radiogram was recently published in CQDL. I’m now compiling the gallery of MFSK32 images from program 135 (Halloween 2015!) and will respond to those reports over the weekend.