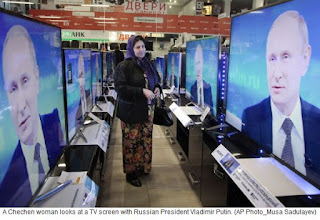 Washington, D.C. - Russian speakers in Estonia, Latvia and Lithuania rank Kremlin-backed media as the least trustworthy among international, Russian Federation and domestic news sources, according to research presented by the Broadcasting Board of Governors yesterday.

In addition, only those survey respondents who considered Russian-backed media to be credible showed a majority support for President Vladimir Putin's domestic and international policies. In the three Baltic nations and Moldova, consuming Russian-backed media did not correlate with support for Russia's policies.
The BBG data found that domestic media ranked first in trustworthiness in Estonia (80 percent) and Latvia (79 percent). International media took first in Lithuania (74 percent) and in Moldova there was a statistical tie between international media (45 percent), Russian-backed media (42 percent) and domestic media (42 percent).
The findings were unveiled at Thursday's research briefing conducted by the BBG and Gallup on the consumption and influence of Russian-language media in Russia's periphery.
Gallup's World Poll data, which was conducted in 2014 shortly after the Russian annexation of Crimea and hence over a year before the BBG data in the Baltics and Moldova was collected, examined how respondents in 12 former Soviet Union countries followed news about Russian actions in Ukraine and Crimea. Data showed the majority of respondents followed the events very closely and reported finding Russian media reliable. For some, that translated into support for some Russian policies. According to the 2014 Gallup findings, in seven of the 10 countries surveyed, the majority of respondents who consumed both "Western" and Russian media showed support for Russia's annexation of Crimea. "Western" media as defined in the Gallup World Poll survey did not specifically include or exclude U.S. international media, according to Gallup presenter Neli Esipova.
Since this survey was initiated, the BBG language services at Voice of America (VOA) and Radio Free Europe/Radio Liberty (RFE/RL) have added or expanded more than 35 new programs on multiple media platforms in Russian, Ukrainian, and other languages to reach new audiences in the former Soviet space and around the world.
Jeffrey Trimble, Deputy Director for the International Broadcasting Bureau, outlined the BBG's strategy in the region and highlighted the flag-ship program Current Time, a daily 30-minute Russian-language television news program produced by VOA and RFE/RL. Current Time is now on the air in nine countries via 25 media outlets. The European version airs in Ukraine, Moldova, Georgia, Lithuania, and Latvia, with segments of the program airing in Israel. A Central Asia version airs in Kyrgyzstan, Tajikistan and Kazakhstan. Weekend Current Time programs -- "Itogi" by VOA and "Nedelya" by RFE/RL -- are on the air as well. Current Time also reaches Russian-speaking news seekers worldwide via digital platforms curated by RFE/RL's DIGIM team, which was launched in September 2015 and which produces and disseminates innovative cross-platform digital content, promotes the Current Time brand in the digital space, and engages Russian-language audiences on social media.
Russian authorities do not allow placement of Current Time on domestic television stations.
Presenters at the research briefing cautioned that comparing the Gallup World Poll survey and the Gallup survey conducted for BBG was problematic, as the surveys targeted different countries, were conducted over a year apart and had several methodological differences, including question wording, context and sampling.

A video and briefing documents are available on the BBG website.
(photo & story via Voice of America)
at 9:42 AM