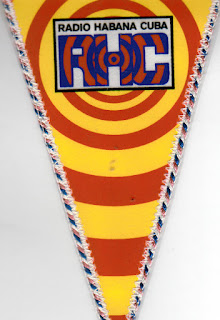 
Hi amigos, I am Arnie Coro, radio amateur CO2KK, and your host at the middle of the week edition of Dxers Unlimited on the air and on the web from beautiful La Habana Cuba where we are experiencing thunderstorms every afternoon and early evening, with the most powerful ones lasting until late at night.

Cuban radio amateurs are well aware of the dangers of lightning, so it has become a ritual to disconnect all equipment after operating, and when on the air, at the slightest hint of an approaching thunderstorm you stop and disconnect everything, including your wires that go to the physical ground.

Since 1990 when they were recorded by on board cameras operating on the now retired Space Shuttles, sprites and elves have captured a lot of interests by geophysicists and space scientist. The most recent event recorded are:

Giant 'ELVE' over Russia
On Aug. 16, high above a thunderstorm in central Russia, an enormous ring of light appeared in the night sky. Using a low-light video camera in the town of Irbit, amateur astronomer Ilya Jankowsky photographed the 300 km-wide donut hovering near the edge of space.

"It appeared for just a split second, surrounding the horns of the constellation Taurus," said Jankowsky.

This is an example of an ELVE (Emissions of Light and Very Low Frequency Perturbations due to Electromagnetic Pulse Sources). First seen by cameras on the space shuttle in 1990, ELVEs appear when a pulse of electromagnetic radiation from cloud-to-ground lightning propagates up toward space and hits the base of Earth's ionosphere. A faint ring of deep-red light marks the broad 'spot' where the Electromagnetic high intensity pulse hits.

"For this to happen, the lightning needs to be very strong-typically 150-350 kilo-Ampères," that is from one hundred and fifty thousand to three hundred thousand Amperes, says Oscar van der Velde, a member of the Lightning Research Group at the Universitat Politècnica de Catalunya. "For comparison, normal cloud-to-ground flashes only reach from 10 to 30 kiloAmperes."

ELVEs often appear alongside red sprites, which are also sparked by strong lightning and are under scrutiny by ionosphere researchers because they may be the cause of some particular form of Sporadic E layer clouds. By the way, during the ELVE event over Russia, Jankowsky's camera caught at least two clusters of sprites dancing nearby.

ELVEs are elusive, and that's an understatement. Blinking in and out of existence in only a millisecond, they are completely invisible to the human eye. For comparison, red sprites tend to last for hundredths of a second and regular lightning can scintillate for a second or more. Their brevity explains why ELVEs are a more recent discovery than other lightning-related phenomenon.

Despite the poor propagation conditions during the weekend, the international event dedicated to lighthouses and lightships was a success, and I think that all participants did enjoyed the relaxed atmosphere prevailing while operating their stations because of the non-contest nature of the event. It did provide a nice opportunity for newcomers to the Dxing world to work the rarely used T4 prefix, authorized for the special occasion to several Cuban radio club stations that operated from lighthouses. Among them, at the Santiago de Cuba Morro Castle Lighthouse T48SC, tango forty-eight sierra charlie accumulated a good number of contacts.

Now we must wait for the final report from the organizers of the ILLW International event to see the results. Let me add that to calculate the short propagation conditions for the weekend I had to use the number 1, yes 01 Sunspot Number feeding the forecasting software, that I regularly use because its simplicity and accuracy, the nice job of W6EL, who made it freely available. W6EL HF propagation forecasting software runs fast and when I compare results with other much more sophisticated programs, the results achieved, are good indeed.

The non-conversational digital communications mode FT8 has already brought a lot of controversy, and the saga goes on and on, something that, in my opinion, has benefitted amateur radio during this extended period of extremely low solar activity and its associated very poor HF bands propagation conditions.
Item # 2 - of special interest to short wave listeners that enjoy catching DX on the tropical broadcasts bands and good news coming from Brazil. A new station on 90 meters, Rádio Cultura de Araraquara is on 3365 kHz in the   tropical band.

The station has just announced that starting last Friday, August 17, it began transmitting, using 3365 kHz, and running one kW, but not specifying the type of antenna in use. The broadcast schedule will be from 2100-0300 UTC and to make the best possible use of both greyline and night-time propagation at that location of Brazil.

As anyone monitoring the HF bands on a day to day basis, will easily find out, the low solar activity continues to limit the chances of shortwave propagation on frequencies above 20 megahertz, even during the best times of the day at any given location. The exception comes when sporadic E layer openings move the maximum usable frequency up past the 25 MHz range.

Recent observations confirm that solar cycle 24 continues to show very weak activity as compared with any of the previous five solar cycles and some scientists are calling for an extended tail end of the cycle to last even two more years, while other solar researchers are telling us that we are now already well into solar minimum.

Si amigos, I receive many radio related questions coming to the ASK ARNIE section of Dxers Unlimited ... and they have helped me to learn more about the radio hobby, making possible to share with my listeners some very interesting findings.

Peter, from Birmingham in the United Kingdom, wrote asking about how he could replace worn out vacuum tubes on a nice 1950's vintage radio receiver that he is bringing back to life. Peter explains that the wooden cabinet is simply beautiful, and the radio was kept in a dry place for storage after it broke down.

After exploring the circuit diagram, Peter found out that the valve or vacuum tube marked ECH81 showed a whitish dust inside the glass bulb, indicating the loss of vacuum, fortunately the ECH81 tube is still available from Russia where it was manufactured in large quantities under the designation 6 INDIA ONE P.

This is Radio Havana Cuba, the name of the show is Dxers Unlimited and here is news about a little known amateur radio satellite the first Phase 5 amateur payload is already operational in an elliptical orbit around the Moon.

Various experiments are being carried out with GMSK and JT4G downlink signals. Stations with 'normal' amateur equipment can receive the downlinks quite well. Downlink signals have even been received with no more than an Arrow antenna, no preamp.

DK5LA was the first to have his signals relayed through LongJiang 2 on 2018-07-15. On August 4, the first picture of an onboard camera was downlinked with SSDV. Other experiments will follow later. Why not give LongJiang 2 a try?

Thanks to Nico, PA0DLO for the above information.

See you all at the weekend edition of Dxers Unlimited next Sunday and early Monday UTC days just after the top of the hour news...send your signal reports and comments about this and other Radio Havana Cuba's programs as well as your radio hobby related questions to inforhc@enet.cu and via air mail postage to: Arnie Coro, Radio Havana Cuba. Havana, Cuba
(Arnie Coro)