Tribute to the island of Lombok 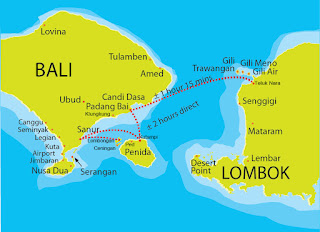 Because of the two major earthquakes that have struck the island of Lombok in Indonesia within a few days, we interrupt the regular flow of our topics here in Wavescan, and we present instead this feature item as a Tribute to Lombok.

Two major earthquakes have struck the island of Lombok just one week apart.  The first major strike, rated at 6.4, occurred on Sunday July 29 (2018) with a death toll of at least 17.  Several hundred tourists were stranded during a hike on the volcanic Mount Rinjani due to a massive landslide, though some found an alternate route down the slopes of the mountain while others were airlifted out by helicopter.

This first quake which struck around dawn, was also felt on the neighboring island of Bali.  American TV personality and cook book author Chrissy Teigen was on vacation with her husband and two children in Bali, and she tweeted about the initial impact of this first earthquake.  She described it as a massive earthquake.

Australian actress Teresa Palmer was vacationing in a treehouse also on Bali with her husband and their two children and she described the tremor as violent and scary.  Teresa was noted for her recent role in the Mel Gibson block buster movie Hacksaw Ridge.  She played the part of the wife of the film’s dramatic hero Desmond Doss.

The second earthquake followed just a week later, on Sunday August 5 and it was even more violent than the earlier quake, and it measured at 7.0.  More than one hundred people have died on this second occasion.  A tsunami warning was issued, but the rise of ocean level was no more than six inches.

At the time of the second quake, Indonesia and Australia were co-hosting an international
conference on regional security and counterterrorism on both Lombok and Bali.  Radio New Zealand International, or more correctly these days Radio New Zealand Pacific, reported that none of the delegates was injured in the earthquakes.

The volcanic mountains in Indonesia make a dramatic scene as viewed from high in the air while the passenger plane passes over the active volcanic islands in Indonesia, en-route from Perth in Western Australia to Singapore Island.  The pilot ensures that the plane is high above any airborne volcanic ash, and that he chooses a route over the ocean in between whatever are the less active volcanoes.  Indonesia’s second highest volcano, Mount Ranjani, at a little over 12,000 feet is located on Lombok.

The shape of the island of Lombok is like a five-sided pentagon with feet sticking out in the  southern corners. The island is 43 miles across, and it is located about half way between North Queensland and Singapore.  There is a shortage of fresh water on Lombok.

During the year 1257 historians tell us, there was a massive volcanic explosion on Lombok that is described as one of the very largest ever recorded on planet Earth.  As a result, Mt. Samalas volcanic explosion, weather patterns all around the world were altered.

Since the early days of settlement on Lombok, feuding among various rulers and ethnic groups, have been a part of the local political scene.  The colonial Dutch authorities were invited to intervene in 1894.  Japanese forces arrived at 5:00 pm on Saturday May 9, 1942. When the Japanese left, the Dutch took over again; and then in 1958, the island of Lombok was incorporated into the newly independent Indonesia.

These days, Lombok Island has a population of 3.3 million, people  and the capital city of the island is Mataram with one-third million.

According to Alan Davies in England with his website Asiawaves, there are some 35 FM stations on the air on Lombok Island.  Radio Republic Indonesia RRI operates two program networks on FM with a total of seven FM transmitters, and also one lone mediumwave transmitter.

It is extremely hard to find any printed information regarding the history of radio broadcasting on Lombok Island (or all of Indonesia for that matter); accurate and reliable information is almost
nonexistent.  Annual entries in the WR(TV)HB provide a useful guide, though even here, the editors have been dependent upon the monitoring observations of just a few, though quite reliable, international radio monitors.

After the end of World War II, amateur and commercial stations began to appear on the
broadcasting scene in Indonesia and like we say, reliable information regarding these stations is almost totally nonexistent.  The amateur broadcasters were known in the national language Bahasa Indonesia as amatir stations.

They were not licensed amateur operators known as hams elsewhere throughout the world, but rather they were small, irregular licensed or unlicensed stations doing their best to provide a needed local radio broadcasting service.  These amatir radio broadcasting stations simply chose what they could find as an open channel in the tropical shortwave bands, and they were on the air with whatever programming they could find.

From the available information, we would suggest that the first radio broadcasting stations on the island of Lombok were installed by government authorities, sometime during the late 1950s.

The first entry in the WR(TV)HB is for the year 1960, and the first and only station listed then operated with the callsign YDX with listed 1 kW on the tropical shortwave 90 m band frequency 3223 kHz. Though shown as 1 kW, the actual power of this transmitter was less than 100 watts.

This original station carried the programming of RRI and the location is given as Mataram, the capital city.  Subsequent editions of the WR(TV)HB show two shortwave channels in use on Lombok and at this stage, RRI Mataram is listed with new callsigns.  The frequency 3223 kHz is shown as YDV5, and a new channel 3365 kHz is shown with the callsign YDV.  Both channels are listed at the same 1 kW, so this additional outlet would seem to be the same transmitter with just another channel at a different time.

The 1973 edition of WR(TV)HB shows the installation of an additional shortwave transmitter that was in use at either 1kW or 5 kW.  The 3223 kHz frequency continued at both power levels, with 1 kW during the day and 5 kW during the evenings.  The 1975  edition lists the power on two additional channels, the new 120 m band frequency on 2390 kHz and on also on 3365 kHz as just 60 watts each.

The 1975 issue also shows an additional new shortwave station on the air, this time at Selong on the other side of the island of Lombok, the east side.  This new station was another government
operated station with just 75 watts on the out of band frequency 2854 kHz with local RKPDK
programing.

There’s a note in the 1975 edition of the WRTVHB stating that all commercial stations in
Indonesia were required to convert from shortwave to mediumwave by March 23, 1975.  However, many of the local commercial shortwave stations were still heard on shortwave after that date.

The usage of shortwave broadcasting by government stations on Lombok Island faded out around the turn of the millennium, with the 3225 kHz channel at Mataram as the final channel in use.  Both power levels of 1 kW and 5 kW were still in use up to that time.

The RRI mediumwave channel with 10 kW on 855 kHz was introduced in the mid 1970’s and it is still on the air to this day.  Supplementary RRI mediumwave stations were also on the air beginning in the 1990s on 1194 kHz and 1251 kHz, though these have since been transferred to the standard FM band.

Beginning in the 1980s, commercial and community radio broadcasting stations began to appear on the mediumwave band on Lombok Island, about half a dozen of them.  All of the  mostly low powered outlets, have since also transferred to the FM band.
(AWR/Wavescan/NWS 394)