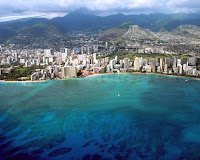 Thanks to contributor Walt Salminiw for the following radio observations from his recent Hawaii DXpedition.
Gayle VH

I've just returned from a short vacation in Maui, Hawaii. In my possession, I brought along my Kaito/Degen 1103 portable receiver along with about 20' of random wire. As is so often the case, my monitoring recaptured some of the thrill that has been lost in recent years as tropical band stations drop out one by one. The norm in the Pacific north west, where I live, is to hear virtually no stations in the dawn period on 60 meters, apart from a few Chinese power houses.

Gone are the days when the band would be full of PNG, Indonesian, and other Asian stations. Well, I found where they all went. Where do you ask? Hawaii is the simple answer! For many of us, Hawaii can represent a relatively easily accessible DXer's paradise. All that one needs is a handy portable SW receiver, and preferably some random length of wire. For the really serious DXers out there, why not take along a real communications receiver. In the past, I've taken along a Kenwood R5000 and dx'd some pretty amazing stations, including the old Taliban radio station from Afghanistan on 41 meters with a wildly drifting signal in English and later in Russian as well. These days, there's an excellent alternative, and that is Software Defined Radios, or SDR for short.

These nimble little units measure no larger than small portables, but one does need a laptop to use with them. I would have really loved to have brought by Dell laptop and SDR-IQ or Perseus receiver, but alas, I didn't. Still, I had a lot of fun. Over two mornings (from about 06:30 to 08:15 AM local or 16:30 to 18:15 UTC), I sat on the lanai scanning the tropical bands. Sunrise occured at 7:03 AM during this time of the year, so no need for super early rising. Here's what I heard on Friday February 15th and Saturday the 16th:

All times UTC
4635 Tajik Radio, Dushanbe fair to good
4750 Probable Chinese at 16:45 on Sat. Chinese programming with weak cochannel (which might have been Radio Peace in Sudan)
4760 Sat only. May have been TWR Swaziland at fair level.
4775 Sat only at fair level with weak music. ?AIR Imphal.
4800 Music at good to very good level. Chinese.
4810 talk at poor level. ?AIR Bhopal or Armenia.
4820 CC talk at good level and s/off at 18:00. Lhasa, Tibet.
4828 Zimbabwe fair with music.
4835 fair to good level. Thought this was an African, but who? Possibly too Alice Springs still on their day frequency instead of 2310.
4840 fair talk AIR Mumbai?
4860 Koran at 16:52 AIR Delhi with Northern Service. Fair.
4880 Good level with a het. Seems on the high side of 4880. Middle eastern sounding music. Presumably AIR Lucknow with Northern service.
4895 fair reception on Saturday. Probably AIR Kurseong, although couldn't absolutely rule out Sarawak (but doubt the latter).
4900 fair to good with Firedrake style music. Voice of the Strait, Fuzhou listed.
4905 Very good reception with easy-listening music. Again, Lhasa, Tibet.
4910 Indian music at 16:54. Presumed AIR Jaipur.
4920 Very good reception of easy-listening music.Lhasa, Tibet.
4930 Very good reception with African accented English. News at 17:25 noticed on Saturday. VOA, Botswana.
4940 English news between 17:30 to 17:35 only followed by Indian music at fair level. Improved to fair to good reception by 16:55. This is AIR Guwahati, in Assam. Heard on Saturday.
4950 lively Portuguese talk at 17:20 at fair to good levels. This is Angola. Either has weak modulation, or was cochannel with a stronger OC station. Not sure. Very rarely heard on the west coast for sure!
4965 poor to fair. Possibly Tajikistan.
4975 poor reception. Again,perhaps Tajikistan. About the right strength to come from that part of the world.
4980 fair talk at 16:57 on Saturday. ?Xinjiang PBS.
4990 poor to fair again on Saturday. Either AIR Itanagar, or Hunan PBS.
5000 WWVH and cochannel Chinese time signal station.
5010 Good reception on Saturday with AIR English news at 17:30. This is AIR Thiruvananthapuram. Don't hear this one very often back home.
5015 fair reception on Saturday with music. Presumably Turkmen Radio, in Asgabat.
5030 Usual power house Chinese station at very good level, just like home!
5040 fair to good on Saturday except for splatter from 5030 presumably AIR Jeypore with their Eastern service.
5060 poor reception of presumed Xinjiang PBS.

Not much to be heard, but perhaps I listened too late in the morning. Now switching to 49 meters, I found the band absolutely alive with stations on virtually every channel. A nice improvement after 17:00 in strength, too.

6055: French talk which is presumably Radio Rwanda. Generally well heard based on past visits to Hawaii.
6250 North Korea with strong signal.
6260 Not sure who this was. Sounded kind of Middle eastern or even African.
6270 someone here as well.
6285 North Korea in Russian at good level.
6915 someone here at poor to fair strength.

I was handicapped with having no internet access (no computer with me), and only an older 2005 WRTH as a resource. Still, I think that you can see that the potential exists for some pretty exciting DX from Hawaii. As for the random wire....I simply tossed it from the lanai to a close tree. I have to admit that the noise is pretty bad in a lot of the resorts owing to energy saving lights, TV sets in the proximity, etc., at least in the Kaanapali area of Maui.

While MW dxing, I did on occasion move down (after sunset) to the beach and DX'd just using the internal ferrite core with very quiet conditions. By the way, I had the opportunity to DX just about every Hawaiian AM station, along with recording IDs from them on my Edirol R-09 mp3 recorder. For distant DX, though, at least on the MW band, one needs a little more than simply using the internal ferrite core antenna. I would definitely suggest using a portable loop, or even a Beverage antenna if room exists. I just dreamed of laying out 500 or more feet of wire along the beach at night, but never had the chance to do this.
(Source:Walt Salmaniw, Victoria, BC)
at 6:50 AM