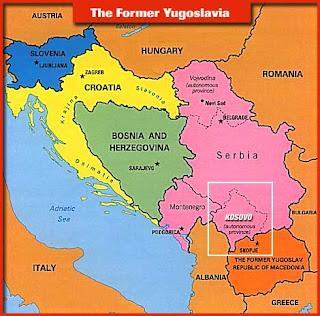 Body Found at U.S. Embassy in Serbia Amid Riots Over Kosovo Independence
A charred body was found inside the U.S. embassy in Belgrade, Serbia, after rioters stormed the complex Thursday evening in protest of Kosovo's declaration of independence, sources in Belgrade told FOX News.
Continued news and photos from Fox News:
http://www.foxnews.com/story/0,2933,331695,00.html
Protesters Storm U.S. Embassy in Serbia and Set Fire Over Kosovo Independence

Rioters stormed the U.S. embassy in Belgrade, Serbia, on Thursday and started a fire in protest of Kosovo's declaration of independence earlier this week.
Masked attackers broke into the building, which has been closed this week, and tried to throw furniture from an office. A blaze broke out inside one of the offices. The neighboring Croatian Embassy also was attacked by the same group.
Crowds outside cheered and chanted, egging the demonstrators on as they stormed the embassy, which was closed at the time and had no police guarding it, Reuters reported.
Continue on this developing story at Fox News: http://www.foxnews.com/story/0,2933,331695,00.html
Video: http://www.foxnews.com/

Kosovo protests hit U.S. Embassy
By Ellie Tzortzi
BELGRADE (Reuters) - Smoke billowed from the American embassy in Belgrade after scores of protesters broke into the building on Thursday, cheered on by crowds outside, in a protest at U.S. support for Kosovo's independence.
One protester climbed up to the first floor of the building, located on one of the Serbian capital's main boulevards, ripped the Stars and Stripes off its pole and briefly put up a Serbian flag in its place.
Continued story at Reuters: http://www.reuters.com/article/worldNews/idUSL2087155420080221
Video: Earlier attack on U.S. Embassy:
http://www.reuters.com/

There are currently no shortwave stations located in Kosovo. RTK is Kosovo’s public service broadcaster. It consists of the television service, broadcast on the terrestrial transmitter network and digital satellite, and two radio stations, Radio Kosova and Radio Blue Sky
Internet streaming at: http://blueskylive.radio-kosova.com/live.php