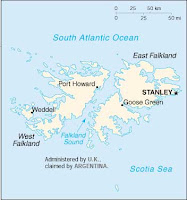 The Falkland Islands Radio Service opened two renovated studios last week. The station is now computer operated, allowing presenters to access music, jingles and programmes at the click of a mouse and can even link up time delayed programmes. The previous equipment was failing and creating problems on a regular basis, explained Station Controller Corina Bishop.

The new system will give better audio quality, and there will be no variations between British Forces Broadcasting Service and FIRS volume levels or when switching to the local news. In the long term there will be the capability to automate the studio during unsociable hours with the effect of increasing local output, said Corina, adding that the equipment has the ability to enable digital broadcasting in the future.

She added: “The BFBS engineers worked very hard to make sure that we were back on air first thing on Tuesday morning and Mario Zuvic switched the BBC World Service onto 530 mediumwave for us so that everyone still had something to listen to on that frequency.”
(Source: Penguin News via Mecropress/R Netherlands Media Network Weblog)
at 6:54 PM