Logs have been edited for clarity 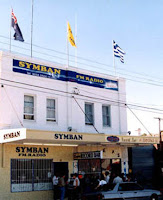 Australia
2368.5, 1325-1335. Radio Symban (presumed).Heard during a brief opening at my local sunrise (1325 UT). Greek songs and music. Recently had been below threshold level, so this was a nice change. Audio clip of music at http://www.box.net/shared/24e4m0acau (Ron Howard, CA/Cumbre DX)

6035, 1300. PBS Yunnan/Voice of Shangri-La. Usual ID in English as, “this is the Voice of Shangri-La, brought to you by Yunnan Radio." Unfortunately the adjacent interference is strongest just at 1300, otherwise this was almost fair in Vietnamese. Recently their reception has been well above the norm.(Ron Howard, CA/Cumbre DX)

India
4970, 1255-1315. All India Radio-Shillong. DJ in English with the Tuesday program, Heart to Heart playing easy-listening love songs (If Ever You're In My Arms Again) Public service annoouncements for having regular eye exams. Time check (“6:45”), 1315 into Hindi. Reception well above the norm till 1345 tune out.(Ron Howard, CA/Cumbre DX)

9425, All India Radio-Bengaluru-National Channel. Confirmed the new schedule for their program in English, “Vividha”. Now on Monday, Wednesday and Friday. In the past was only Monday and Wednesday-on from 1435 (just after the news in English) till 1500. Often presenting an interesting program.(Ron Howard, CA/Cumbre DX)

Indonesia
3344.97, 1302-1402. RRI Ternate. It’s Thursday so it’s the “Bali International English Club” show, today was solely a self serving promotion of their own English Learning Center. Almost fair signal. Even with all the self advertisement, I still found this entertaining. (Ron Howard, CA/Cumbre DX)

Mongolia
12085, 0959-1057.* Voice of Mongolia. Tune-in to station interval signal. Talk in unidentified language at 1000. Some lite instrumental music. Interval signal at 1029 followed by nice English ID announcement and into half hour English program. News at 1031. Local music. Abrupt sign off. Very weak at tune-in and too weak to identify the language at that time, but improved to a stronger level by 1025. Signal best between 1025-1045. Started to get noisy after 1045. Thanks to Dave Valko tip.
(Brian Alexander, PA)

Oman
15140, 1411-1423. Radio Sultanate of Oman. Thursday show in English with lady DJ (not Adam as usual, but she did have a British accent) playing pop songs. Poor signal quality (Ron Howard, CA/Cumbre DX)

4790, 0550-0603. Radio Visión, Chiclayo. After several weeks I can't listen to it, today on air in the early morning with good signal here in the northwestern Spain. Religious songs in Spanish and comments by male: "La Voz de la Salvación". SINPO 24432. (Manuel Méndez, Spain/HCDX)

6019.215, 0953-1000. Radio Victoria. Lots of interference on frequency from Radio Australia, but noted male's Spanish comments. Not much else heard due to noise, signal poor. (Chuck Bolland, FL)

Thailand
9890, *1230-1259.* Radio Thailand. English service with national news, business news, and ads. Station off abruptly at 1259. Also heard on Apr 21, coming on at 1230 but playing Thai vocal and instrumental music with no announcements to 1253, when several ads (Crystal Design Center, a trade company, and one or two others) in American-accented English were noted. Program about Thai culture followed at 1256. Off in mid-sentence at 1259:30. Fair signal both days but fadey and hard to copy at times.(John Wilkins-CO/Cumbre DX)