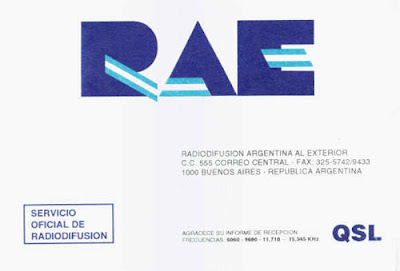 In our program today, we continue on from where we left off last week in the story of wireless and radio in Argentina. You will remember also that this was in response to a request from Jean Barbat in Beaumont, France; and so we take up the story today, with the shortwave radio scene.
It was somewhere around the late 1920s that the first radio broadcasts from Argentina were noted on shortwave. At the time, there were two shortwave communication stations active, one at Monte Grande and the other at Hurlingham.
The subsequent callsigns at Monte Grande were:-
LQA LQB LQC LSA LSC & LSD,
and we would suggest therefore that six shortwave transmitters were in operation, each rated at probably 10 kW.
The subsequent callsigns at Hurlingham were:-
LQR LSL LSM LSN & LSP,
and we would suggest therefore that five shortwave transmitters were in operation, each rated, again, at probably 10 kW.
It is noted that there were occasional shortwave broadcasts on the air from both locations, Monte Grande & Hurlingham, usually for special occasions, and sometimes there were occasional relays of mediumwave programs for network relay to country locations. Around the same era, some of the mediumwave stations in Argentina were also installing their own shortwave transmitters.
One of the well heard communication transmitters that often carried radio programming during the 1930s was the 10 kW LSX on 10350 kHz. This station was operated by Transradio Internacional and they issued attractive QSL cards to listeners in North America, Europe & the South Pacific for these broadcasts.

All through these eras, the total number of shortwave broadcast stations on the air in Argentina in any one year was usually around a dozen, with most of them and sometimes all of them, as part of the government owned radio networks.

The official government operated international shortwave service was inaugurated on April 11, 1949 with the usage of two transmitters rated at 50 kW each. Nine years later, this international broadcasting service was renamed as Radiodifusion Argentina al Exterior, RAE Internacional. Programming was taken from mediumwave LRA with studios in the Central Post Office building, though a new self contained studio building was constructed in 1980.
In 1977, a Harris 100 kW transmitter was added to the facility known as the General Pacheco Transmitter Plant. Then, six years later again, RAE took over the five shortwave transmitters, rated at 1 kW, 7½ kW, & 10 kW, that were previously on the air as Radio El Mundo.
These days, RAE is listed with three shortwave transmitters, two at 50 kW & one at 100 kW; and, as was stated recently, they did not close their international shortwave broadcasting service at the end of last year after all. RAE has always been noted as a good verifier of listener reception reports.

Voice of America Relays in Argentina
It is probable that every radio broadcasting station in Argentina, mediumwave & shortwave, carried a relay of programming from the Voice of America in Washington DC in those earlier years. During the early 1940s, the shortwave programming from NBC in New York was relayed off air by 130 stations in South America, including Argentina; Crosley programming in Cincinnati was relayed by 28 stations; and CBS had their relay network down there also. From February 1, 1942 onwards, all of this relay programming formed a part of the Voice of America network.
Beginning on May 4, 1942, the VOA took out a specific 13 week relay via the eleven station network of Radio El Mundo in Argentina, and this included shortwave LRX with two transmitters rated at 7 kW & 10 kW. Then, in May 1943 for example, station LSN2, a feeder transmitter at Hurlingham, was noted in New Zealand on 9890 kHz with a relay from CBS in New York. This had to be a VOA program produced by CBS, and it would appear that Buenos Aires was relaying this programming on shortwave for rebroadcast by local mediumwave stations in countryside areas.

Adventist World Radio in Asia - RAE Relay & QSL Cards
As an interesting side note, Adventist World Radio at one stage issued a valid QSL card on behalf of RAE Internacional in Argentina. By previous arrangement, a special program segment was inserted into the old AWR DX program, “Radio Monitors International”, on behalf of RAE in Buenos Aires, Argentina.
This program was broadcast on international shortwave on August 12, 1984 by the Sri Lanka Broadcasting Corporation, as well as by some of their Home Service stations on shortwave, mediumwave and FM. RAE Argentina sent 200 QSL cards to the AWR-Asia office in Poona India, in two different designs, and these were issued to verify the special broadcast back a quarter of a century ago.
(AWR Wavescan/ NWS # 113 via Adrian Peterson)
at 9:02 AM