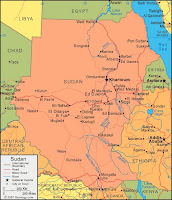 A Sudanese anti-government youth group announced on Thursday that it has launched a radio station on shortwave frequencies across the country in order to drum up support for regime change, a bold bid to challenge state control over broadcast media outlets in the country. Worsening economic conditions manifested in sharp increases in food prices compounded by a glum mood following the secession of the oil-producing south in a referendum held last January have stoked dissent in north Sudan. A clutch of anti-government youth groups have emerged and are actively attempting to galvanize support for a popular uprising against the 22-years old rule of President Omer Al-Bashir government inspired by current revolts in the region.

However, their few attempts to stage anti-government protests over the last two months had failed to take on a mass appeal and were swiftly squashed by the authorities. One youth opposition group known as Youth for Change, the shorthand of which is Shararah [Arabic for spark] has taken the battle to a whole new level by announcing the launch of its radio programming on shortwave across the country. Breaking the news via a statement on its Facebook-based page, Shararah said its radio broadcasts would start on shortwave frequencies across the country as of Thursday, March 31. According to the group’s statements, the radio programming would be broadcast every Tuesday, Thursday and Saturday for 30 minutes starting at 6:30 pm [1530 UTC] and can be heard on 15540 kHz.
“We urge our listeners in all parts of Sudan to follow our broadcasts and provide us with information on whether our broadcasts have reached all [target] areas” the group’s statement said. “The service will cover all parts of Sudan in a continuation of the tremendous efforts exerted by different segments of the society, especially youth groups, in order to get rid of the [National Islamic] Front regime to extricate Sudan from this dark abyss,” the statement added. The group further asked those wishing to contribute to the radio or send audio materials to contact it through the following e-mail: syr.radio@gmail.com
It is not clear whether Shararah radio’s broadcasts will be relayed from inside or outside the country, but Sudanese authorities have in the past successfully blocked the operation of radios it deemed hostile to the government, especially in the densely-populated Khartoum state. Unlike print-media which enjoys relative freedom in Sudan, broadcast media is tightly controlled by the state and heavily regulated by the National Telecommunication Corporation, which also filters and monitors internet content. There are 16 radio stations broadcasting on FM frequencies in the capital Khartoum, almost all of them focus their programming exclusively on entertainment, religious affairs or sport.
(Source: Sudan Times/R Netherlands Media Network Weblog)
at 9:14 AM