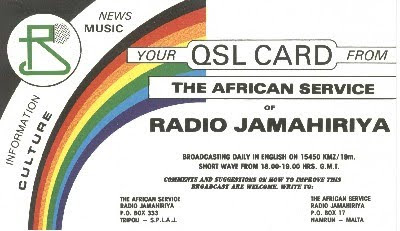 In our program here in Wavescan a few weeks back, we presented the first part of our Station Profile on the story of radio broadcasting in the North African country of Libya.

In that program, we gave the story of the early Morse Code wireless stations in Libya, and also the program broadcasting stations that were established in earlier years by BFBS, the British Forces Broadcasting Service, and AFRS, the American Forces Radio Service.
In our opening feature here in Wavescan today, we present Part 2 in the story of radio broadcasting in Libya; and on this occasion, it is the story of the government radio services, on both mediumwave and shortwave.

Actually, radio broadcasting on the part of the Libyan government took place quite late, as compared to similar events in other countries. As far as we can determine, the first government operated radio broadcasting station in Libya was on the air for a brief period of time in Cyrenaica in 1947. One isolated monitoring report informs us that the station was operating in the standard 19 metre band on 15320 kHz.

We would suggest that this station was a communication station located in the eastern city of Benghazi and that was on the air temporarily with program broadcasting. It would appear that the first regular broadcasting station in Libya was installed in the capital city, Tripoli, in probably 1953. According to the World Radio Handbook for the following year, this station was a small facility, operating with just 250 watts on 1552 kHz. It would appear that this new small station was an interim facility while a larger station was under construction. A larger mediumwave station was inaugurated five years later, with 50 kW on 1052 kHz, apparently on the edge of suburban Tripoli. Around the same time, a shortwave transmitter was installed at El Beida, the most northerly point, in eastern Libya, and this was listed with 3 kW on 6140 kHz.

Over the years, at least two additional shortwave transmitters rated at 100 kW were installed at El Beida, and also a 500 kW mediumwave unit for wide area coverage in Africa, as well as nearby Mediterranean areas. The shortwave usage at El Beida was closed out around the year 2000. Work commenced at another shortwave station listed as Benghazi in 1958. Over the years, several transmitters were installed at this location, including 3 kW, 7½ kW, 10 kW and at least one at 100 kW.

These days, no shortwave unit is active at this Benghazi location, though a 100 kW mediumwave unit is active on 675 kHz. In the early 1970s, work commenced on the construction of another shortwave station located at Sabratha in the northwest corner of Libya. At the time, it was stated that this would become the largest shortwave station in all of Africa, with four Thomson transmitters rated at 500 kW each and a total of 48 curtain antennas. For many years, test transmissions were noted from this supposedly large station, and ultimately, in 2002, program broadcasting began. This station seems never to have fulfilled its original ambitious purpose, and currently it is on the air with just two transmitters carrying programming under the title, “Voice of Africa”.

It would almost seem that the Libyan authorities would build a new radio station instead of maintaining and repairing existing stations. Another shortwave station was constructed at Al Assah, again in northwest Libya, near the border with Tunisia. This facility was inaugurated on August 28, 1996; and again it was re-inaugurated on December 8, 2001 with four shortwave transmitters. This station is no longer listed as active on shortwave, though a 500 kW mediumwave unit is shown on 1449 kHz.

As if they don’t have enough transmitter locations, at least two more were constructed in more recent time, both at inland oasis locations. One was at Sebha in the middle of the country, with two Harris transmitter at 100 kW; and the other at Ghat in the bottom south west corner of the country, also with two transmitters at 100 kW. The Sebha station was in use with the broadcast of radio programming from 1985 to 2002; and the Ghat station was heard in Bulgaria with test transmissions four years ago, though apparently it was never taken into full time broadcast usage. To make things more complicated in the radio scene in Libya, the Transmitter Documentation Project, published by Ludo Maes in Belgium, lists a total of two dozen additional shortwave transmitters that were installed at unknown locations in Libya from the mid 1970s to around the year 2005.

No doubt many of these units were installed at already existing locations, but perhaps additional locations are also involved. These additional units were procured from Siemens-RIZ in Zagreb Croatia. It would appear also, that various transmitters at various locations in Libya were also in use for varying time periods for general government communications, in addition to program broadcasting. We should also mention that Libya took out a relay from four shortwave transmitters at 500 kW located at Issoudun in France, beginning in 2003.

Programming from Libya to France was provided by at least one communication transmitter, located at either Sabratha or Sebha. This program service was presented under the same title, “Voice of Africa”, and it was on the air for a period of some five years. So, what can you hear from troubled Libya these days? If you live somewhere near any of the Mediterranean areas, you can tune in on mediumwave to some of their powerful stations, if they still happen to be on the air. On shortwave, just two of their 500 kW transmitters located at Sabratha are listed as in use on air, so maybe some programming can be heard further afield on shortwave.

In what might be described as better times, Libya issued large colorful oversized QSL cards for their broadcasts on both mediumwave and shortwave. These cards identify the shortwave broadcasting service from Libya as “Radio Jamahiriya”, and they were obtainable from two different addresses, one in Libya and the other in Malta. The QSL card, printed in English and Arabic, depicts a large ornate rainbow. Other QSL cards from Libya show current country scenes and ancient historic scenes throughout their country.
(AWR Wavescan/NWS 110 via Adrian Peterson)
Photo/Teak Publishing Photo Arcives


Libya Al Hura TV now available on Arabsat
According to an on-screen ticker, the online TV station Libya Al Hurra, founded by the late Mohammed Nabbous, is now available on Arabsat. Various tweets say it’s on 11585 V 27500 3/4. It’s also reported on Eurobird 2 at 25.5° East on 11013 H. I’m still trying to clarify whether the new station Libya Ahrar TV from Doha actually launched on schedule last night. I was informed that there is a delay, but I have not managed to confirm that. Additional observations on either station are welcome. Update: Chris Greenway confirms that the new station from Doha did launch on schedule, and there’s now a third opposition station. (R Netherlands Media Network Weblog)
at 9:21 AM