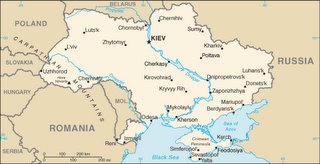 One of my regular contributors, Walt Salmaniw, of Victoria, Canada, recently shared his loggings from a trip to Kremenchuk Ukraine. In following blogs I'll post additional loggings. Thanks very much Walt....now that's what I need.....a DXpedition to wrap up this long hot summer!
Gayle VH

RUSSIA 9690 0623 16 August. Tatarstan Wave. Always interesting to me to
monitor this station from Samara. Sign's on always at 10 minutes past the hour with a single IS, then ID in Tatar, then the IS again once, and ID in Russian. Most programming is in Tatar, although today, Thursday August 17th at same time, virtually the entire broadcast was in Russian when I checked at 0620. Superb signal. (Salmaniw, Kremenchuk Ukraine)

NIGERIA 15120 1740 16 August. Voice of Nigeria finally has it right! Very
powerful signal with excellent modulation and in the clear with English
business news, and then the news about Nigeria program from 1742. I hope they keep it up! Interesting local perspectives too. A rarity from Africa these days, so I hope they keep it up. Heard also at 0604 on 17 August with S9 + 20 signal over a relatively strong CC station cochannel. Where's the freq coordination? (Salmaniw, Kremenchuk Ukraine)

ETHIOPIA 5500 1749 16 August Voice of Tigray Revolution. Very good reception with Horn of Africa music. // of 6350 mostly covered by ute traffic (the latter is very much more present in Ukraine then on the WCNA). (Salmaniw, Kremenchuk Ukraine)

INDIA 3365 1821 16 August AIR Delhi with very good strength with Indian music. Best in LSB. Why doesn't the WRTH nor PWBR list these? Vlad immediately ID'd this for me. Thanks! (Salmaniw, Kremenchuk Ukraine)

AUSTRALIA 4835 2155 16 August. VL8A ABC Alice Springs. Don't normally hear the 60 m Northern Service Aussies in Victoria, and quite a dx catch here in Ukraine. Have to use LSB to avoid the Peruvian on 4835.4. Good morning heard, and ABC ID just before ToH. Improved over the next half-hour. Fair signal. Parallel to 4910 VL8T Tennant Creek, but poor under cochannel. Katherine not heard, though. (Salmaniw, Kremenchuk Ukraine)

TAJIKISTAN 4635 2220 16 August. Tajik Radio 1 is the most powerful 60 meter signal here from CIS countries. Presumed Tajik with mentions of George Bush, terrorism, the BBC, and Jimmy Carter. They once broadcast frequently in Russian, but no more. (Salmaniw, Kremenchuk Ukraine)

NIGERIA 4770 2226 16 August Radio Nigeria Kaduna. An S9 signal but distorted with overmodulation, so virtually impossible to follow. A sick transmitter it seems. Reminds me of Radio Son La in Vietnam! (Salmaniw, Kremenchuk Ukraine)

MONGOLIA 4830 2232 16 August Mongolian Radio HS2. My most interesting 60 m logging. Very martial sounding music a la Pyongyang, but the language is totally different. Not at all oriental sounding. Hints of slavic words but unlike anything else. Vlad says it sounds Kazakh to him. To me it's very similar to Tatar, which makes sense, I suppose. Fair to good at times with a solid S7 signal. // to 4895 which at times is more powerful and 7260 which also is well heard except for adjacent splatter. All in parallel initially, but when rechecked at 2302, 4830 and 7260 were in Russian, but not 4895. I could not find anything showing a Russian transmission at this time. By 2310, then reverted to HS2 programming, again all in //. I'll keep an eye on this during the days to come (although very late at night here!). (Salmaniw, Kremenchuk Ukraine)

MAURITANIA 4845 2236 16 August Radio Mauritania at "nuisance levels" with Arabic programming. The most powerful (and one of few) 60 m Africans remaining. (Salmaniw, Kremenchuk Ukraine)

BRAZIL 4885 2238 16 August. Brazilian stations start to fade in about this time, while most of South America is still in daylight. I didn't stick around to ID which of the 3 Brazilian stations this one was. Fair level. (Salmaniw, Kremenchuk Ukraine)

EQUATORIAL GUINEA 5005.0 2251 Racio Nacional, Bata. Good to very good
reception with African high-life music with a hint of Latin influence it seems. Non-stop until 2258 and directly into the NA through to 2300. I recall hearing this one regularly at excellent levels in France a few years back. (Salmaniw, Kremenchuk Ukraine)

UKRAINE (non) 11980 0600 Despite reports of the flea-powered hobby station, Dniprovska Khvylia (Dnipro wave), not a peep has been heard from them. I did hear a brief oc this morning at 0558, but this lasted all of 30 seconds or so. Vlad tells me this may be a weekend only station as is located in or near Zaporyzhia. I'll report if I hear them...one of my goals of this visit! (Salmaniw, Kremenchuk Ukraine)

That's it for now from sunny and warm Kremenchuk, Ukraine. Tomorrow evening I'm off to Dontetsk and a village in Luhansk oblast in the very south-east of the country. Towards the end of the month I'll be in the west. Will try to report as I can. By the way, receiver used was Vlad's AOR 7030. Recorded on an external mp3 recorder. Antenna either a inverted L or his K9AY. City location. RF is much worse than 4 years ago, especially on MW during the day making this band virtually unuseable. Sign of the times, I suppose.
at 10:48 AM