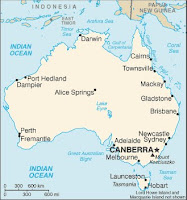 Some time ago, we presented the story of the American shortwave station in Australia that was established under General Douglas McArthur for communication with American units in the Pacific and in the continental United States. This shortwave transmitter facility was established at Hemmant, which is an outer suburb of Brisbane in Queensland, and it was on the air for a period of three or more years with the usage of several units, including a 10 kW Federal transmitter and a 40 kW Press Wireless transmitter. The shortwave receiver station was located half a dozen miles distant, in another outer suburb, Capalaba.
It is true that this double station was established primarily for armed forces communication purposes during the latter half of World War 2. However, there were many occasions when it was in use for the forwarding of news information to the United States, and even voice reports for re-broadcast by the mediumwave networks in the United States.
Since the researching and writing of this topic, we have discovered that there was a whole network of at least ten of these American communication stations in Australia, beginning in the year 1942. These stations were used mainly for teletype transmissions, as well as for communications in high speed Morse Code.
The very first of these American radio stations in Australia was installed in a suburb of Melbourne, the capital of the south eastern state of Victoria. This unit became operational on March 10, 1942, just two weeks before General MacArthur arrived in the city by train. The Melbourne station was a joint operation between American and Australian personnel, and under MacArthur, it was in service under the American callsign WTJJ.
This Melbourne station, WTJJ, received messages from the Philippines and elsewhere via WVJK in Darwin and forwarded them on to the United States via the army station WTJ in Hawaii. In view of the long range transmission from WTJJ Melbourne, we would presume that this transmitter was rated at least at 10 kW, and probably more likely at 40 kW.
It was around this time that another temporary station was installed, this time in a railway train, for use in various areas of eastern Australia. The train facility was made up of teletype transmitters, probably three of them, rated at 3 kW and manufactured by Hallicrafters for use in airplanes.
Another one of these stations was installed in Sydney, New South Wales and this was on the air under the American army callsign, WVJM. This station communicated with American army communication stations located in Melbourne, Brisbane and Townsville.
In the north eastern state of Queensland, three more of these American radio stations were established for communications within Australia and beyond. These stations were located in Brisbane and Townsville.
Initially, the first Brisbane station was installed temporarily in a tent on the Redlands Bay Golf Course, some distance north of Brisbane itself. A substantial building was quickly erected and it housed a 10 kW Federal transmitter with 5 rhombic antennas nearly one hundred feet tall.
Another temporary station with a 1 kW Federal transmitter was installed in the girl’s high school at Somerville House Brisbane for communication with Sydney and Townsville. The two temporary stations in Brisbane, Redlands Golf Course and Somerville House, were closed in February 1943 when the more substantial facilities at Hemmant and Capalaba were inaugurated.
The American communication station WVJL in Townsville in northern Queensland, was located adjacent to the Coastal Radio Station, which housed the transmitters for the AWA maritime station VIT and the local mediumwave broadcast station 4TO. During this era, VIT-4TO communicated with VIG Port Moresby as part of the wartime Coast Watch service. The Port Moresby transmitter was the old mediumwave unit, 4PM, which had been converted for shortwave telegraphy usage.
In the Northern Territory, there were two American shortwave communication stations, one near Darwin itself right on the north coast, and the other at Adelaide River, 75 miles inland. The Darwin station was identified as WVJK, and the inland station as KAZ. The inland station initially handled all American traffic from the Philippines, and in 1944 it was transferred to Hollandia in Dutch New Guinea; but that’s another story for another time.
Suffice it to say that each of these ten known American communication radio stations handled communication traffic, as well as at times, media messages for broadcast and publication. The stronger stations, and in particular the 40 kW unit on the edge of suburban Brisbane, also carried voice messages for relay on mediumwave throughout the United States.
(NWS 41 via Adrian Peterson/AWR)
at 9:26 AM