'KNLS Alaska is famous all over China' 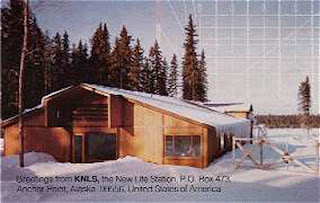 World Christian Broadcasting operates shortwave station KNLS in Alaska, which is a member of NASB. The station broadcasts to Asia in Russian, Chinese and English. Recently, WCB sponsored a tour of China. Thirty-one persons visited the Chinese cities of Beijing, Xian, Luoyang, Zhengzhou, Shanghai and Hong Kong. WCB President Charles Caudill described a very interesting experience he had on that trip which highlights the importance of shortwave radio in China:

“A few weeks before leaving for China, I was contacted by e-mail with an invitation to speak for the worship service of one of the underground churches. I emailed back that I would be honored to bring the sermon. I was contacted shortly after that by someone who said she was my contact person and that she would also be my interpreter. She explained that she would meet [my daughter] Kelly and me in the lobby of our hotel and that we shouldn't try to come to them. No problem. We didn't have the address. We still don't.

“At the agreed upon time, a young lady, talking on her cell phone, walked directly to me and called me by name. That's not too surprising since I was the only American man in the crowded lobby. We took a cab and rode for almost an hour. She asked the driver to stop a few blocks from our destination. She did not want the cab driver to know where we were going. We walked those several blocks and were told we were near the building where the church meets regularly. We walked by another building to make sure we were not being followed. After a cell phone call, the lobby door opened and we took an elevator to one of the top floors. Another cell phone call got the door to the apartment opened. We walked into a room that was set up for a worship service – song books, Bibles and study materials.

“Why all of the clandestine moves? Remember, what we were about to do is illegal in China. The participants could be subject to arrest, or even worse. The authorities probably would not have done any violence to Kelly or me because we were foreigners. They simply would have sent us home.

“For years we have wondered about the reception of the KNLS signal in the large cities of China. Our monitors tell us the signal is being received, but that frequently the signal is jammed. We were also concerned about the relatively small amount of mail we receive from this particular city. At the same time we realize that it is illegal to write to us. And now that emails are monitored by the Chinese government, many of our listeners are even afraid to send emails to us.

“So, when I asked the question at the beginning of my talk, 'How many of you are familiar with KNLS?' I was surprised when more than one half of those young people raised their hands with smiles on their faces. Two of them even spoke out and said, “KNLS is famous in [their city.]” Afterward, a patent attorney, one of the leaders of the congregation, told me that the statements made during worship were true. He said, “KNLS is famous all over China.” He said that he listens every day and is a great fan of [KNLS announcer] Edward Short. He expressed surprise that Edward is American and not Chinese. He was amazed that somone other than a native Chinese could display such excellent use of their language.”
(NASB DSec 09/Dan Elyea)
at 3:56 PM