Time to Give Thanks to the Soldiers, Sailors, Airmen, Marines and Coast Guardsman 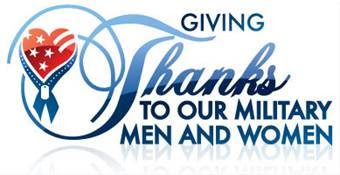 For those seeking a quick way to show appreciation for troops' serving far from home this holiday season, look no further than "Giving Thanks," a new initiative from the Defense Department's America Supports You program.

America Supports You connects citizens and corporations with military personnel and their families serving at home and abroad.

"This is a simple way to connect our citizens to our (servicemembers) using modern technology," Allison Barber, deputy assistant secretary of defense for internal communications and public liaison, said of the text messaging program.

The program officially kicked off Nov. 17 and concludes at midnight PST Nov. 22. Between those times, people wishing to express gratitude to the troops for their service can text a brief message to 89279. Each text message sent will receive a response from an active-duty servicemember in return.

"We know that thousands of families will be sitting down for Thanksgiving dinner and thinking about loved ones who are far away from home serving their country," Ms. Barber said. "We are counting on other American families to take a moment during their holiday celebration to think of those families and their family members who are serving and say, 'Thanks.'

"The reassurance that others are thinking about them will mean a lot to our troops," she added.

Those who send a message during the six days of the Giving Thanks program also will be directed to the America Supports You Web site. There, they'll find a sampling of messages from the public and a running tally of how many messages have been received. They'll also be able to read messages from the troops.

Some servicemembers in Iraq and Afghanistan already have sent messages thanking the public for the support. Angie, an Airman serving in Iraq, wrote: "Your support means so much, especially during the holidays. God Bless."

Troops of Combined Security Transition Command Afghanistan also wrote to express their appreciation for the continued support they receive.

"To all the great Americans who go out of their way to support all the Soldiers of the Combined Security Transition Command in Afghanistan, thank you."

In an effort to reach the Hispanic community, which is represented in large numbers in the armed services, America Supports You is working with Interlex, an advertising, marketing and public relations firm with multicultural capabilities.

"What we are doing is complementing the general market efforts to mobilize the Hispanic community to become involved in America Supports You," said Rolando Rodriguez, Interlex's managing director for public relations and community-based outreach. "Obviously that's important because many Hispanics do consume different press than the general market would."

The firm's goal is to inform Hispanic communities that many Hispanic youth are serving in the military. "There (also) are a number of Hispanic families that (will be) impacted during the holidays because (the servicemembers) are not sitting at the table with them, so it's important to show their appreciation," Rodriguez said.

"MTV Tr3s has Mi TRL, (and) what they're going to do is ... live reads on their video countdown, which is their signature program," he said. "They're going to talk about, 'Hey, support this initiative.'"

Mi TRL also will run a banner at the bottom of the screen promoting the text messaging program. In addition, the program will air a full screen of information on how to thank troops.

Interlex USA also is working to involve Hispanic celebrities to let the Hispanic community know that thanking a servicemember for their sacrifices this holiday season is as easy as sending a text message.

"When we talk about text messaging, Hispanics ... out-pace all groups," Mr. Rodriguez said, adding the text messaging group tends to be younger, much like MTV Tr3s viewers, who range from 12-34.

He added that his team is working to get the message out to Hispanic communities in New York, Chicago, Los Angeles, Miami and Dallas through Spanish-language media outlets, as well as entertainment and sporting venues.

These are the same types of venues that will carry information about the America Supports You Giving Thanks program to the general market, officials said.
at 9:05 PM