a reminder to our Blog Readers from an earlier post ...

Radio Free Asia announces the release of the third QSL card in its Radio Pioneer series. The card honors Serbian-born American physicist, Nikola Tesla. Tesla was a pioneer in many fields. The Tesla coil, which he invented in 1891, is widely used today in electronic equipment. Nikola Tesla patented the basic system of radio in 1896. Tesla’s schematic diagrams describing the basic elements of a radio transmitter were later used by Marconi. In 1896 Tesla constructed an instrument to receive radio waves. He experimented with this device and transmitted radio waves from his New York laboratory. The radio device clearly establishes Nikola Tesla as a radio pioneer. In Colorado Springs, where he stayed from May 1899 until 1900, Tesla made what he regarded as his most important discovery-- terrestrial stationary waves. By this discovery Tesla proved the Earth could be used as a conductor and would be as responsive as a tuning fork to electrical vibrations of a certain frequency. He also lighted 200 lamps without wires from a distance of 25 miles (40 kilometers) and created man-made lightning. The QSL card below will be issued for all valid RFA reception reports from July 1 – August 31, 2009. 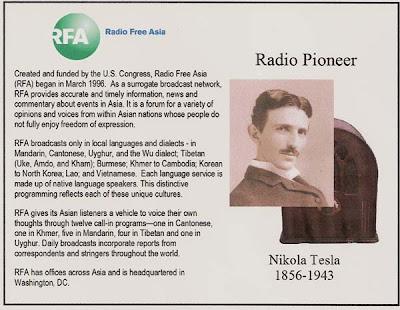 Radio Free Asia (RFA) is a private, nonprofit corporation that broadcasts news and information to listeners in Asian countries where full, accurate, and timely news reports are unavailable. Created by Congress in 1994 and incorporated in 1996, RFA currently broadcasts in Burmese, Cantonese, Khmer, Korean to North Korea, Lao, Mandarin, the Wu dialect, Vietnamese, Tibetan (Uke, Amdo, and Kham), and Uyghur. RFA strives for accuracy, balance, and fairness in its editorial content. As a ‘surrogate’ broadcaster, RFA provides news and commentary specific to each of its target countries, acting as the free press these countries lack. RFA broadcasts only in local languages and dialects, and most of its broadcasts comprise news of specific local interest. More information about Radio Free Asia, including our current broadcast frequency schedule, is available at http://www.rfa.org/ .
RFA encourages listeners to submit reception reports. Reception reports are valuable to RFA as they help us evaluate the signal strength and quality of our transmissions. RFA confirms all accurate reception reports by mailing a QSL card to the listener.
RFA welcomes all reception report submissions at http://www.techweb.rfa.org/ (follow the QSL REPORTS link) not only from DX’ers, but also from its general listening audience.

Upon request, RFA will also send a copy of the current broadcast schedule and a station sticker.
(RFA/Al Janitschek)
at 9:20 PM