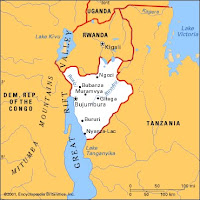 Dave Kernick writes: Government-controlled Radio Burundi is observed streaming live audio online from its (English-language) website at www.rtnb.bi. This is the organization’s second network, which is on the air at 0300-2100 UTC broadcasting mainly in French, with news bulletins noted at 0800, 1000, 1100, 1400 UTC. Newscasts in English were heard at 1130 and 1600 UTC, and in Swahili at 1145 UTC.

Although the website refers to the service as “RTNB Radio”, on air it identifies variously as “Radio Nationale”, “Radiodiffusion Nationale de Burundi”, or simply as “Radio Burundi”. Radio Burundi’s first network broadcasts entirely in the Kirundi language, and is believed to be only available on FM.

Burundi was part of the former Belgian colony of Ruanda-Urundi, until it split from what became Rwanda and achieved independence as the Kingdom of Burundi in 1962. Radio Burundi around that time was only on air for six or seven hours a day, broadcasting on the single frequency of 6195 kHz shortwave.

Andy Sennitt adds: When I checked the website, what was presumably embedded audio in an unidentified language (certainly not French) started playing automatically after a few seconds. It appeared to be a live stream, grossly overmodulated. Be careful not to have the audio turned up too loud when you first access this site!
(R netherlands Media Network Weblog)
at 6:30 PM