The Unfinished Story of Radio Broadcasting on Pitcairn Island 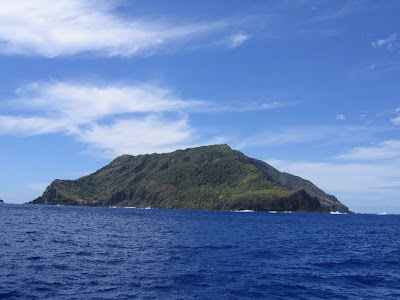 Special thanks to Adrian Peterson for sharing the following script from a recent Wave Scan program.
Gayle Van Horn

In our program last week, you heard two aspects of information about Pitcairn Island; the introductory story of the island and its people, and the early wireless years on the island. In that program, you heard about the early usage of wireless for communication with nearby shipping, and also the story of the radio station with the double callsign, VR6AY-PITC, which was in use for amateur communication and also for occasional relay broadcasts to the United States. Today, we continue with additional information in this interesting saga as we present the story of radio broadcasting on Pitcairn Island.

We go back to the epic year 1939. There was trouble over there in Europe, the ambitious American National Geographic Expedition to Pitcairn Island was cancelled, and the low power 60 watt shortwave transmitter VR6AY was still on the air, though not heard widely.

There was an amateur radio operator in New Zealand by the name of Nelson Dyett, with the callsign ZL2FR. He had married a Pitcairn girl and he volunteered to go out to isolated Pitcairn Island, to take his own amateur radio equipment, and install it on the island. This project was granted approval by the New Zealand navy.

Four men went to Pitcairn for this project, and they constructed a hut for use as the radio station and they installed all of the radio station equipment. This station was in use for communication with nearby shipping and with New Zealand, and it was known variously as a station operated by the British navy or the New Zealand navy. It was identified in radio magazines as VR6AY, the older licensed amateur callsign, and VR6AA, the amateur callsign that Dyett used on Pitcairn.

However, give three more years, and the New Zealand navy sent out additional radio equipment on a ship that broke down in mid ocean and had to be towed back to Auckland in New Zealand. A few weeks later, in May 1944, the vital radio equipment was delivered to Pitcairn, and a contingent of men constructed buildings and installed equipment, which included 2 transmitters, 2 receivers, 2 diesel generators, and a rhombic antenna system. This station was now noted on air under the callsign ZKG.

Later in the same year, the station was upgraded with additional equipment which included meteorological equipment for weather forecasting. When Pitcairn Radio was heard on air with weather information, the callsign was noted as ZBF.

As circumstances would have it, additional shortwave equipment from New Zealand was installed in 1952, and the callsign of Pitcairn Radio was changed to ZBP. Soon afterwards, plans were implemented for the use of station ZBP as a radio broadcasting station for coverage of nearby islands throughout the Pacific areas.

The prestigious World Radio TV Handbook listed the scheduling for the broadcast of this planned programming, though there are no known monitoring reports of any actual program broadcasts from ZBP.

However, in 1962, the radio station was again completely rebuilt, and plans were announced once again for the broadcast of radio programming for coverage of nearby Pacific islands; and once again, there are no known monitoring reports of any radio broadcasts from this station.

Well, in 1985, the station was once again upgraded, but this time no plans were announced for radio broadcasting. However, international radio monitors in New Zealand and the United States noted that they heard Pitcairn Radio, ZBP, with a musical identification signal and bird chirps, before moving into phone traffic to New Zealand.

In 1994, the station was closed in favor of satellite communication with New Zealand. An attempt was made to stage a final radio broadcast from the station, but the government authorities would not permit. So, Pitcairn Radio, with all of its varied forms of equipment and its usage of half a dozen callsigns over the years, quietly left the air, never to return.

However, there is yet more to this story. David Ricquish in New Zealand informs us that the New Zealand air Force installed a 50 watt mediumwave transmitter on the island in January 1978, and that it was on the air with general traffic for the South Pacific for just five days.

In addition, there was in reality, a series of test broadcasts radiated from Pitcairn Island as a preliminary to establishing a regular radio broadcasting service. At the end of the year 1961 and the early part of 1962, a series of test broadcasts was on the air from amateur station VR6AC, operated by Floyd McCoy. Programming consisted of re-broadcasts of the religious program, "Voice of Prophecy", taken from the large discs produced in Los Angeles, California. One listener in the United States was honored to receive a QSL letter from VR6AC verifying his reception of these broadcasts.

Then, four years later again, there was a repeat attempt at test broadcasts from VR6AC, and these were noted again in the United States. However, due to the difficult logistics that would be involved, no permanent radio broadcasting service was ever established on Pitcairn Island.

So, there really was radio broadcasting from Pitcairn Island, and it occurred on three separate occasions. Back in the year 1938, there was a short series of program broadcasts from station PITC as a relay to the NBC network in the United States via KKW at the RCA radio station located at Bolinas in California. Then, in 1961 and 1966, there were two additional attempts at radio broadcasting from the island with the launching of two series of test broadcasts from amateur station VR6AC.

It should be added, that QSLs do exist for these brief bursts of radio broadcasting from this lonely and isolated volcanic outcrop in the South Pacific, known to us all as Pitcairn Island. Many QSL cards have been issued by Floyd McCoy for amateur QSO contacts from his station VR6AC. In addition, there were two printings of the QSL card issued for station PITC. The first card, with a known print run of 1500 copies, shows the callsign VR6A. The second printing gives the callsign as VR6AY and it is probable that a total of 1500 cards were printed in this batch also.

The VR6A & VR6AY QSL cards show the radio equipment in use and also a map of the Pacific showing the location of Pitcairn Island. These unique QSL cards command a very good price when sold on eBay. Back in the middle of last century, some of these cards were sold as tourist items to passengers on visiting ship. The cards are stamped with New Zealand postage stamps and they were cancelled with the Pitcairn Island cancellation. 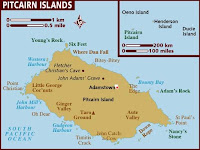