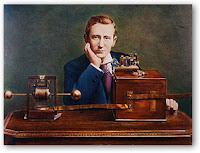 As far as is known, the world's oldest radio card was printed in the year 1901, and it shows a photo of the radio inventor, Guglielmo Marconi. This card is quite small, measuring just 2¼ inches by 1½ inches; that is, less than one quarter the size of a regular postcard.

Marconi was born at Bologna in northern Italy on April 25, in the year 1874. His mother was an Irish heiress, and his father was an Italian businessman. It is said that young Marconi was fluent in both languages, Italian and English, without a trace of an accent in either language.

Quite early, Marconi became interested in the usage of electricity and he read all of the documents he could find about the exploits of others in the transmission of wireless signals without the usage of a conducting medium. He also studied under another Italian inventor who was making preliminary experiments with wireless transmission.

Initially, young Marconi conducted his own earliest wireless experiments indoors at the two storeyed family home in northern Italy. That was in the year 1894. Then, in the following mid year, Marconi transferred his experiments to an outdoor location on the family's large property in northern Italy. Here, he was able successfully to transmit a wireless signal for more than a mile, with a high hill lying in between the primitive transmitter and the equally primitive receiver. That was in 1895.

During the following year, the twenty two year old Marconi went to England where he presented successful demonstrations at several different locations before government and business leaders. He formed his own wireless company in England, and he then established two demonstration wireless stations on the island of Wight.

Quite soon afterwards, Marconi went back to Italy where he gave several successful demonstrations to high ranking officers in the Italian navy. Some of these demonstrations were made on navy vessels at sea. Then he went back to England again where he established a factory for making wireless equipment.

One of his great achievements was the transmission of a wireless signal from his huge wireless station located at Poldhu in Cornwall England, with reception across the Atlantic Ocean at Signal Hill, near St John's in Newfoundland. This wireless signal travelled 2,000 miles, and it circumnavigated a mountain of water 125 miles high, due to the curvature of the earth. We know today of course, that the signal across the Atlantic was reflected off the ionized layers of the ionosphere.

In 1912, he lost the sight in one eye in an automobile accident; and he died at the age of 63 in the year 1937. At the time of his death on July 20, all radio stations throughout the world went silent for two minutes as a mark of respect for the man who is honored these days as the "Father of Radio".

Thus, the world's earliest wireless card, printed in England in the year 1901, is a very significant card to all radio historians. It was issued to honor Marconi way back then, when he was just twenty seven years old, and already making himself a name in the wireless and radio world.
(NWS#21 via Adrian Peterson-AWR)
at 9:43 AM